Ever since a report was released last week that shows legendary Penn State football coach Joe Paterno covered up the child abuse being committed by his former assistant Jerry Sandusky, our cartoonists have been weighing in with their thoughts.

While most critics are calling for Paterno’s statue to be removed (including our cartoonists), Mobile Press-Register cartoonist JD Crowe thinks the entire Penn State football program should be suspended – for 14 years. 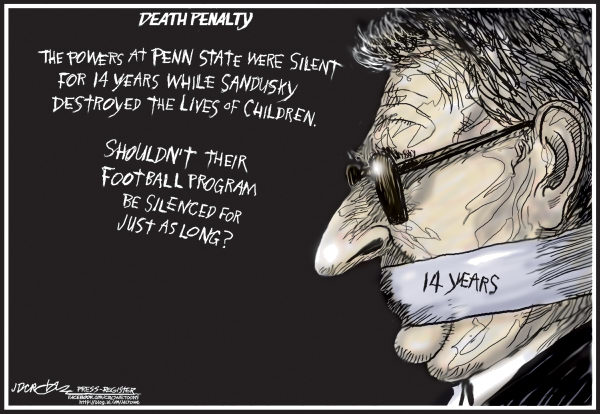 And here’s what he wrote on his blog:

For 14 years, Jerry Sandusky was allowed to roam, raping children and destroying young lives while the powers at Penn State turned a blind eye and said nothing.

The Penn State football program should be silenced for at least 14 years. It’s as plain as the nose on Joe Paterno’s face.

Do you agree with Crowe, or should the football program not be punished? Comment below or drop us a note on our Facebook page.