Here’s my new cartoon about the protests going on throughout the Middle East and Asia over an anti-Muslim film posted on YouTube: 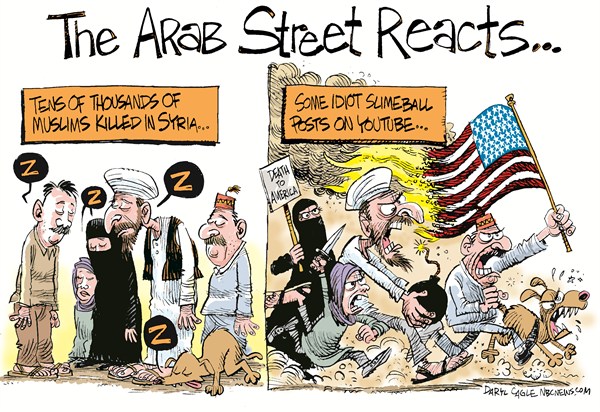 Most American cartoonists have spent the past few days drawing about Mitt Romney, after a grainy video was released of the Republican Presidential candidate telling a group of fundraisers almost half of the country feel they are “entitled” to government benefits and “lazy.”

So I thought I’d share a handful of cartoons by foreign cartoonists weighing in on the growing protests and outrage in the Arab world:

Do you think our president could stop campaigning long enough to attend intelligence briefings, so he will notice what a grave insult was done by the extremists in the Muslim world ? If he had, he might have been able to get the State Department prepared, so our 4 people might be aliive today.

I don't think there was any way to know that this film was being made. I sure it wasn't a big secret, but the American government isn't watching everything American's do. No matter what some of you think. If they watched everything there would be no bank robberies or murders. So there was a small obscure film being made that was made in someone back yard. With a camera a little better than the one in my phone. They posted it to you tube and then probably called some radical muslim and said did you see what was on you tube. The first indication the state department probably got was…. well who knows I would like to.

Yes, the Federal government is not watching all these films, but when the Libyan Government approaches our government 3 days prior to the attack and informs us of the impending attack on 9/11, you would think Obama might have sent Marines in immediately instead of after people got killed. It's not what we think the government is watching, its what the Obama administration did before the information giving to them before the attack. Then after the attack, they try to cover up their knowledge in it afterwards. It is simple a failure of leadership that costed the lives of 4 people. it sickens me that the Liberal Stream Media is already looking for Bush as being the escape goat. Yes, the guy that orchestrated the attack was released from Gitmo in 2007 and depending on why he was released, that may be a failure. The biggest failure was failure to act and it caused people to die.
As for all the Liberals who believe Bush knew about the 9/11 need to get with the Birthers and have a conspiracy party. The 9/11 commission proved that Bush had no prior knowledge of the attacks on 9/11.
As for the riots themselves; I think most Americans can care less, as long as they keep it over there and our families are not harm.

correction – its what the Obama administration did NOT DO WITH the information giving to them before the attack.

Please provide the source of your information that the Obama administration was given a 3-day notice of the attacks at the Benghazi consulate.

The movie, the movie, the movie… not terrorists. Plz just an excuse for whimpy leadership and fear of using the words terrorist and war, except to describe the reps war and terror on women, what a joke… and the shooting at Ft Hood was work place violence, and the airplane shoe bomber was an isolated event unrelated to terror… I thought the liberal elite were smarter than to buy this total BS