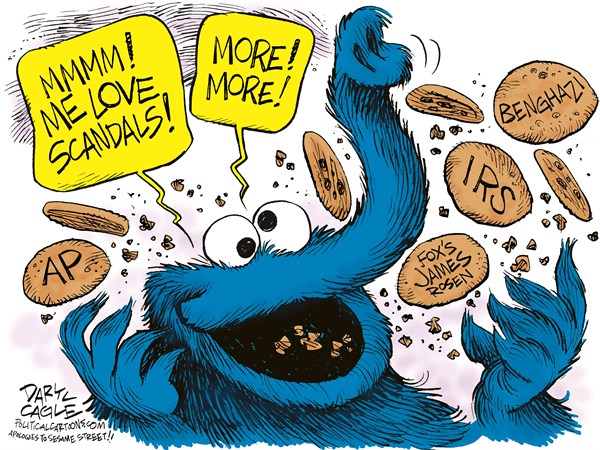 Here is my newest cartoon, with the media as an abused spouse of our petulant president. I did two versions of this one, with Obama saying “Bitch” for brave editors, and one with Obama saying “Jerk” for timid editors. I hope they will print “Bitch” but I expect that they will choose to print “Jerk.”  Here is the rough sketch. Here it is in black and white, as most newspapers readers will see it – “Bitch” version.

Editors can be pretty darn timid, and I suspect that both versions of this cartoon might scare them off.

My grouchy editorial cartoonist colleagues, who lambasted me for my two-version Miranda cartoon, will be debating banning two versions of editorial cartoons as “unethical” at our upcoming convention. I must admit that, if some kinds of cartoons are banned, I’ll be motivated to draw them anyway, just to break the rules.

Another thing my colleagues will discuss banning are cartoons that are similar to other cartoons a cartoonist has drawn in the past. This abused press cartoon is similar to an oldie I drew about high gas prices. It will be interesting to see how the cartoonists plan to enforce their new ethical rules.

The abused spouse gas cartoon generated some angry mail from actual abused spouses who were upset with me for not taking them seriously, in some strong and emotional language.  I actually apologized for this one, since people were so upset.  For any readers I offend with my new cartoon, you again have my apology – it is not my intent to criticize abused spouses – the cartoon is only about Obama and the press! 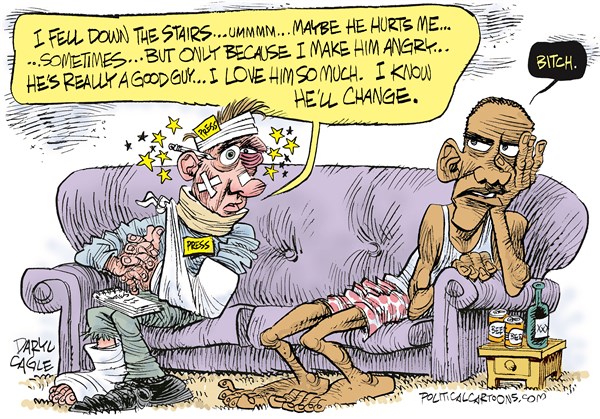 Here are my last four cartoons.  The most recent is below, on the press growing less cute and adorable for Obama.  I think if I drew puppies in all of my editorial cartoons, my work would be much more popular.  I didn’t quite know how I would handle this one when I started drawing, so the rough sketch is a bit of a mess. I was thinking of making this a four panel cartoon at first, with the doggie growing progressively bigger and a caption, but the simple two panel format won out.  here is the line art that most people will see in their newspapers that print in black and white. And here is the color.  Readers love the doggies. I drew the cartoon below when Obama made his first statement about the IRS scandal.  here’s the black and white most people see. And here’s the color. Before that I did this one on the ongoing, outrageous, sexual assault scandals in the military. And I drew this “Energizer Bunny” cartoon about the Benghazi Scandal that the Republicans can’t bear to see fade away. There was a time when I would see an Energizer Bunny cliche editorial cartoon every week. Alas, those were the good old days. 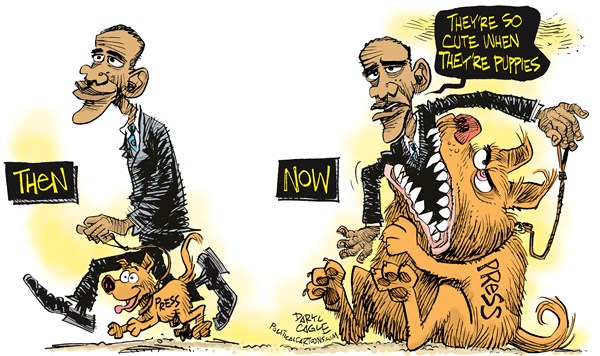