Every couple of  years it is time for another Monopoly metaphor cartoon. Here’s my cartoon today about the police violence protests. I get contacted by doctoral students who write their dissertations on the usage of particular metaphors in editorial cartoons – they like to count how many times they occur. Takes the joy out of a cartoon, huh? Well, that’s what doctoral students do. I might suggest that if anyone wants to do their thesis on Monopoly metaphors in editorial cartoons, they will have a lot of counting to do. The next one is a rare cartoon where I had something positive to say, touting what was then the biggest charitable donation in history – Warren Buffet’s multi-billion dollar donation to the Bill and Melinda Gates Foundation. The 1930’s era rich guy character in Monopoly, “Rich Uncle Pennybags“, is classic cartoon fodder whenever news about rich people comes along, and a pig character won’t do. Usually he doesn’t appear in political cartoons that are too flattering to him. I drew this next one with the George W. Bush stock market crash and subsequent bailout of the evil bankers (who, by the way, were never prosecuted). Remember when five Gitmo prisoners were traded for sketchy American POW, Sergeant Bowe Bergdahl? I drew this one with little caricatures of the released Gitmo prisoners. Back when I was working with msnbc.com I rarely got a call from an editor asking for anything, so I was surprised one day to hear from an editor at the Today Show, which was planning lots of coverage on Paris Hilton, who was being released from jail that day. They really wanted a quick cartoon, so I gave them this one. When George Zimmerman killed Trayvon Martin, not so long ago, I drew my most recent “Get Out of Jail Free” cartoon. 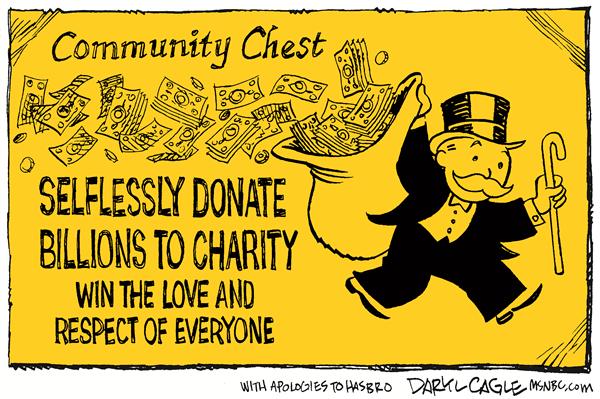