The riots in France have been fascinating to watch. The “Giletes Jaunes” (Yellow Vest) protests were triggered by increases in gasoline taxes that French President Emmanuel Macron implemented to discourage people from driving, as part of his battle against Climate Change. The protest movement sees Macron, a rich, former investment banker, as an aloof elite. Those yellow vesters can go “eat cake.” I love those crazy, historic, giant French hair-doos with depictions of ships and birds and crazy, coiffed, exotic stuff.

Poor and rural “Gilets Jaunes” who must drive to work, donned the yellow vests that they are required by law to keep in their cars for roadside emergencies, as a theme for their protests against Macron and the rich elite that they see as out of touch with their reality.  Here’s a class warfare cartoon by my buddy Robert Rousso, the dean of the French cartoonists (“jaune” or yellow, rhymes with “Jones” in French.) Marie Antoinette is a great cartoon cliché. Here’s a “TRUE!” cartoon I drew back in 1995. This really is true. Here’s Marie Antoinette as a cow, in a poster I drew for the Press Cartoon Festival in St Just le Martel, France, side by side with a cow sculpture that festival organizer, Blanche Vandenbroucke, dressed to match my poster. I think Blanche did an impressive job! 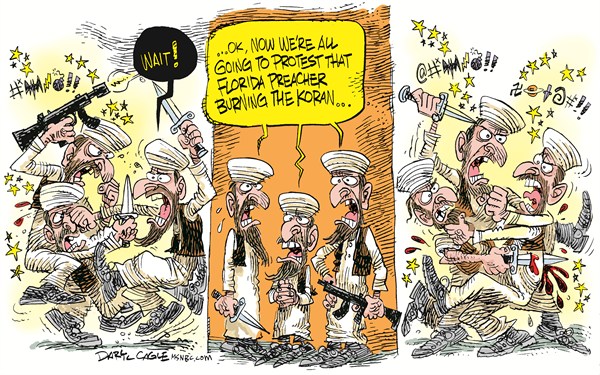