The White House Correspondents Dinner was even more of a show this year as President Trump chose to have a competing rally in Harrisburg, Pennsylvania. Trump seemed to pull out all the stops on bashing the press, so I decided to pull out the bopper clown. I almost did two versions of this cartoon, one with a media clown, and another with a normal looking reporter as the bopper. A few years ago I drew conservative and a liberal version of a cartoon because I changed my mind about the issue and I was assailed by some of my cartoonist colleagues who accused me of creating a new business plan to get twice the value at half the cost, by drawing two versions of cartoons while abandoning my principals.  I was tempted to do two versions of this one, to annoy my colleagues, rather  just for fun – but the clown version was better.

I’ve also been rethinking the way I draw Trump to be more how I feel Trump than how I actually see Trump, so I’m making him fatter, with a longer, bigger, bottom of the face just because the bottom half of his face is more interesting and when cartoonists find something interesting, we make it bigger. Big hair. Big bottom of the face. Big poochy lips.

Boxing with an inflatable bopper character is a standard editorial cartooning cliché. Here’s another one of mine from ten years ago … I’ve enjoyed the O’Reilly news. It is so nice to have a story that doesn’t involve Trump or possible nuclear annihilation. Here’s my new cartoon on O’Reilly getting the boot. Here’s an O’Reilly oldie I drew 13 years ago. He looks so much younger … And we’ve gotten more O’Reilly cartoons today, here are some I liked, below. I think O’Reilly is hard to draw. I have to fiddle around with his face for quite a while before I’m happy with is. Rick McKee didn’t have any trouble with the O’Reilly in his cartoon below … This Ed Wexler cartoon is a great Trump caricature … And I liked this David Fitzsimmons “Killing” cartoon … 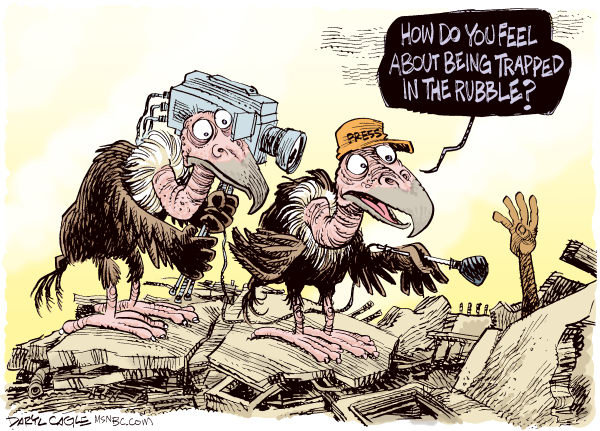