I had great fun at the European editorial cartoonists convention in St Just le Martel France the last two years and I’m going again this year. It is a public event in the small French town, and any fans who would like to visit with the scores of attending editorial cartoonists are welcome to come. The cartoonists often sit at drawing tables and are happy to chat and do drawings for visitors.

St Just le Martel is the patron saint of a little French town near Limoges; his bones are housed at an ancient little church in town.  The story goes that little St Just was walking along one day when God asked him to throw his hammer (martel); when the hammer landed, water squirted out of the ground. God told little St Just to build a church on the spot, founding the little town. That’s an adult St. Just (right) breaking his dinnerplate halo with his martel, in an image that the town seems to have adopted as a logo (I don’t know who the artist was on this one).  That’s the church that houses his bones at the left.

The tiny town opens itself up to editorial cartoonist from around the world every year at the end of September.  The townsfolks put the cartoonists up in their homes and get together to prepare giant meals for the cartoonists and what looks like the whole town through the “Salon.” And the little town has built a big, nice cartoon museum (below). It is hard to imagine any little town in America doing something like this (although it looks like Kenosha, Wisconsin and Marceline, Missouri may be headed in that direction).

I did the poster for this year’s Salon (right, click here to see the sketch and a large version of the poster). The Salon/festival runs over two weekends from September 27th through October 5th. The first weekend they give their “Humor Tendre” (tender humor) award to someone like a children’s book illustrator who draws nice, sweet cartoons; the award consists of a live sheep.  The week between the weekends can be a bit slow, but some cartoonists hang out for the week between the two weekends.

The second weekend, when most of the editorial cartoonists attend, they give the “Humor Vache” (cow humor, or harsh humor) award to a more satirical, caustic cartoonist. I won the cow last year, which is why I did the poster this year; there seems to be a tradition of the cow winner doing the poster for the following year.  See me with my charming prize, Josette the cow, at  last year’s event here.

St Just le Martel is way out in the French boondocks, cow country, and they are proud of their cows. The cow has become a symbol for the Salon/festival – the Limoges cow is always brown, like Josette.  Here are some more posters from recent Salons … 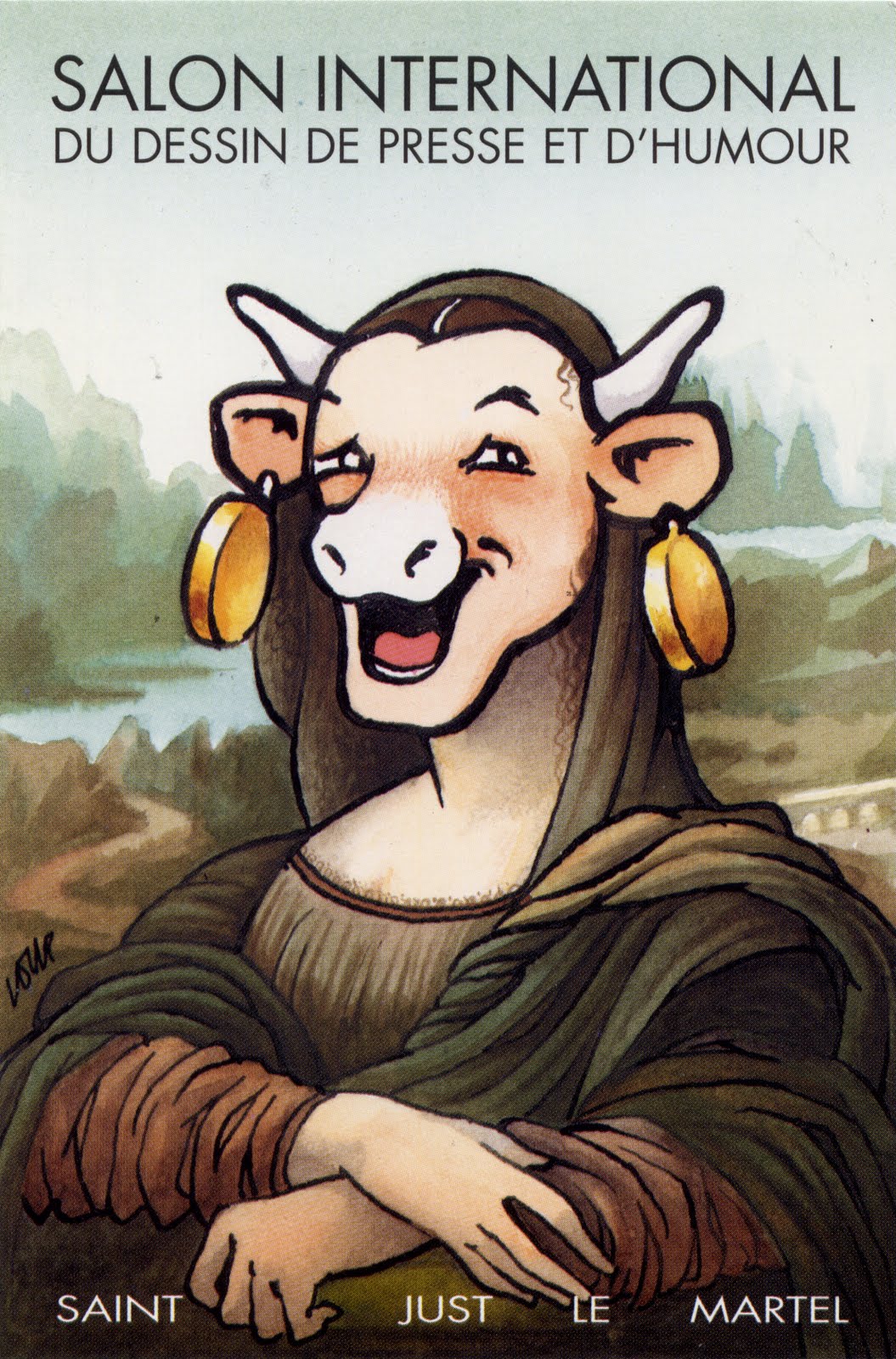