I think Harriet Tubman was a good choice for the $20 bill. I drew her booting President Andrew Jackson out of his perch. This is really a local Nashville cartoon as Jackson is Nashville favorite son; his slave plantation, the “Hermitage” is an impressive local attraction. Some critics have complained that Jackson’s great legacy is the “trail of tears” where displaced native Americans were marched to reservations in Oklahoma as Jackson broke treaties with the “indians” and sent many to their deaths. The “trail of tears” ran very close to the Hermitage, and Jackson reportedly didn’t bother to walk outside to take a look. Critics thought a native American choice would have been better than Tubman, given Jackson’s history. See me draw this one in real time, in the video below.

I color the cartoon in the live-stream video below. 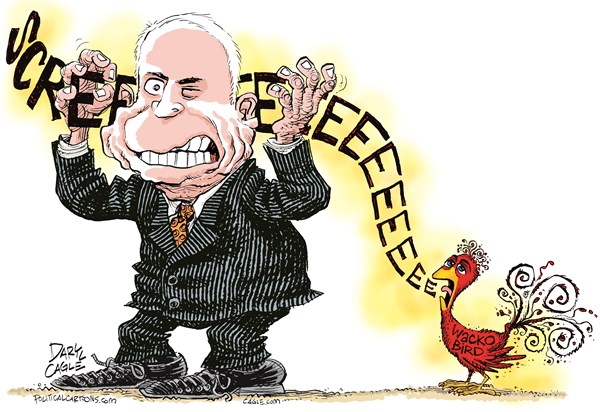 We’ve received a lot of great cartoons about Chick-fil-A from both sides of the argument. Some cartoonists supported the First Amendment rights of a CEO voicing his own personal opinion, while other cartoonists thought spending corporate profits on anti-gay causes was bigotry that deserved to be called out.

The largest response came in reaction to this tough cartoon by Jimmy Margulies of The Record: 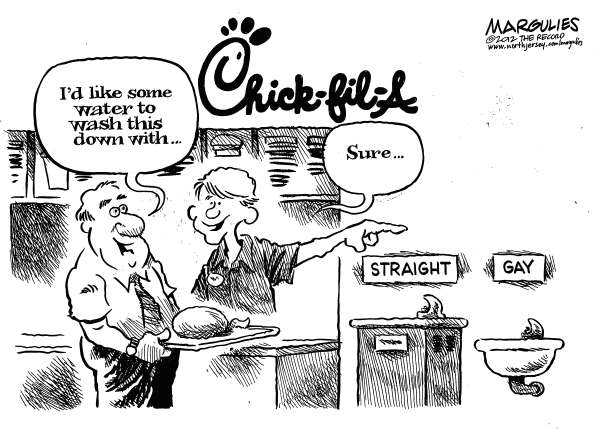 I asked Jimmy to comment on the cartoon, and here’s what he wrote:

I received both praise and condemnation for this cartoon. Those who agreed with me seemed to really like it. Those who did not expressed their disagreement in a few different ways. Some took the cartoon literally, suggesting I was saying that Chick-fil-A discriminates against its gay customers. I explained the cartoon was an exaggeration. Others felt that I was supporting the boycott of the restaurant and that I was denying the owner his freedom of speech. I explained that the cartoon took no position on the boycott, and that the owner is free to express his views, as well as give money to fund opposition to same sex marriage, but that I found this position objectionable, so I was using my cartoon to speak out about the injustice on the issue of same sex marriage.

Given the potency of the issue, I was glad my cartoon became part of the debate.

As you can imagine, readers on both sides of the argument weighed in on this polarizing cartoon:

Teri Lesesne: I elect to boycott companies that spew inaccurate information and use their “fame” as a platform for hate. You are free to support them. That is what freedom is all about. But freedom has to be for everyone.

Kerry Wilson Cook: It doesn’t matter. Us gay people don’t go to chickfila anyway. We are all too health conscious to eat the slop that is fast food!!

Jamie Lockett: I wonder how political cartoonists would feel about mayors banning newspapers that carry their cartoons simply because those mayors didn’t like the content.

Jordan Fouts: I like how the same people who suck the invisible thumb of the free market get so mad about boycotts.

Joyce Linnae Crady: I hate boycotts. They hurt innocent workers & the economy. I vote for religious freedom and freedom of speech. As long as Chick-fil-A doesn’t discriminate in their establishments, they have a constitutional right to their beliefs and a right to express them.

Sunny Arts: This comic is an affront to the efforts of the civil rights movement – when segregation was truly being preached and enforced. Nobody is shoving gays to the ‘back of the bus’.

Steve Paysen: Have you seen the support of Chic Fil A today? I’d say you first of all are wrong in your portrayal, and who are you to take away the right of any man to answer a question with his conscience?

Terry Lee: Talk about rhetoric. Let’s be clear. People aren’t upset or up in arms about a man’s opinion or religious belief. People are boycotting this business because the BUSINESS donates large sums of money to anti-gay political/hate groups. He is free to express his opinion, certainly. I also am free to take my money elsewhere and encourage others to do the same.

What’s your opinion of the cartoon? Comment below, or drop us a note on our Facebook page.

Today we celebrate the life of Martin Luther King, Jr. whose non-violent civil rights movement altered the lives of millions of African-Americans in the south.