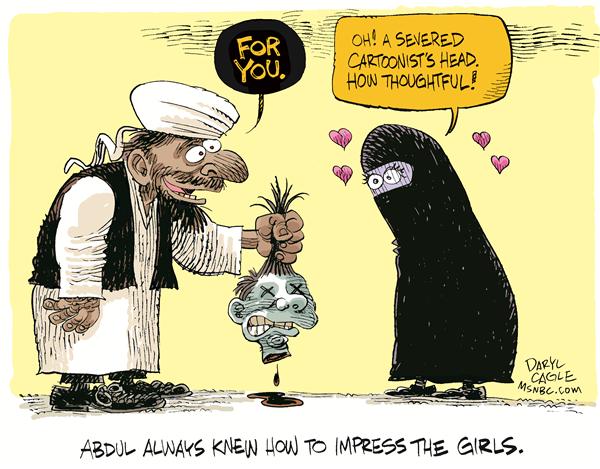 Nothing generates anger in the Muslim world like a cartoon. The most recent cartoon-Jihad comes from a Danish newspaper that printed cartoons depicting the prophet Muhammad. The Jyllands Posten, Denmark’s biggest newspaper, has been bombarded by street protests, international diplomatic incidents and death threats against cartoonists who have gone into hiding, fearing for their lives.

I’m fond of the Jyllands Posten newspaper because they run my cartoons. Reporter Anders Raahauge wrote the report below to cartoonist Doug Marlette who alerted me to the ongoing events:

“To test the limits of self-censorship, we asked all Danish cartoonists to draw Muhammad. We were provoked by the fact that a Danish author of children’s books couldn’t find any illustrators for his planned, decidedly non-polemic book on the prophet. Twelve cartoonists dared.

“There has been a great uproar. 5000 Danish Muslims protested in the streets of Copenhagen, 12 Muslim ambassadors demanded that our Prime Minister should take immediate and harsh action against (us) which he firmly declined (to do). The ambassadors then complained to the “Organization of the Islamic Conference”; there has been a general strike in Kashmir, and a political party in Pakistan, with Danish affiliations, has put a bounty on the heads of the 12 Danish cartoonists: 50,000 Danish Kroners for each execution.”

Danes treasure their press freedoms. The newspaper ran the Muhammad drawings as part of an article about self-censorship in the press, noting that even with a free press defined by law, there are other constraints regarding what can or can’t be published. The Danish prime minister refused to meet with ambassadors from 11 Islamic countries, led by Egypt, who objected to Denmark’s “smear campaign” and demanded punitive action against the newspaper. The ambassadors then announced a general boycott against Denmark. The United Nations weighed in, conveying sympathies to the offended Islamic countries. Last week, in an apparent concession to the angry Muslims, Danish Prime Minister Anders Fogh Rasmussen urged Danes to exercise their rights to free speech without inciting hatred against Muslims. The Danish government had the prime minister’s words translated into Arabic and distributed to Middle Eastern countries in the hope of easing the diplomatic crisis. Jyllands Posten’s editor-in-chief is quoted as saying, “the next step will be giving orders to suppress the newspaper.”

I found the offending cartoons on the web; they are disappointingly dull and it is hard to see how they could make anyone angry. Muslims consider any graphic depiction of Muhammad to be taboo. For the Muslim countries, it is a matter of imposing their sensibilities upon the infidels in the West. For the Danish “infidels” at Jyllands Posten, it is a matter of press freedom and an unwillingness to accept restrictions on an absolute and treasured freedom, which includes the right to offend anyone they choose to offend. In America we take our freedom to offend seriously; we would never threaten the lives of artists who paint the Virgin Mary with animal dung, or put a crucifix into a jar of urine -we limit the argument to whether our National Endowment for the Arts will subsidize these artists.

Depictions of Muhammad are not the only cartoons that inspire Islamic rage. Montreal Gazette cartoonist Terry “Aislin” Mosher had a similar experience. In response to a deadly terrorist attack against foreign tourists in Luxor, Egypt, Mosher drew a dog wearing Arab headgear; the dog was labeled “Islamic Extremism” and the caption read, “With Apologies to Dogs Everywhere.” Mosher and his newspaper received a flood of Muslim threats and vitriol in a Jihad similar to the situation in Denmark.

A cartoonist whom I syndicate, Sandy Huffaker, drew a cartoon showing an Iraqi holding a book titled, “The Koran for Dummies,” and an American soldier asks, “Anything in there about GRATITUDE?” I was bombarded by many thousands of e-mails in a flame campaign instigated by the Council on American Islamic Relations (CAIR), which asked readers on their Web site to e-mail me. The e-mails were hysterical, filled with colorful threats and demands that I fire and punish Huffaker. I posted a big batch of the emails on my Web site and asked my own readers to respond to CAIR. (My Web site has a rather large audience, so I flamed CAIR back.) Being on the other end of a flame campaign may have been a new experience for CAIR, because their flame campaign against me stopped abruptly -or more likely, CAIR saw that the hysterical rantings of their supporters, displayed on my Web site, did not speak well for their cause.

Pulitzer Prize-winning cartoonist Doug Marlette of the Tallahassee Democrat, found himself blasted by a CAIR e-mail Jihad when he drew a cartoon with the caption, “What Would Muhammad Drive?” The drawing showed a man wearing Arab headdress and driving a Ryder truck (a reference to Oklahoma City bomber, Timothy McVeigh). In response to an inquiry from Jyllands Posten, Doug writes, “I was used to negative reactions from religious interest groups, but not the kind of sustained violent intensity of the Islamic threats. The nihilism and culture of death of a religion that sanctions suicide bombers, and issues fatwas on people who draw funny pictures, is certainly of a different order and fanatical magnitude than the protests of our home-grown religious true believers.”

Marlette continues, “As a child of the segregated South, I am quite familiar with the damage done to the “good religious people” of my region when the Ku Klux Klan acted in our name. The CAIR organization that led the assault (on me), describes itself as a civil rights advocacy group. Among those whose “civil rights” they advocated were the convicted bombers of the World Trade Center in 1993. They cannot be taken seriously. For many of those who protested my cartoon, recent émigrés, many highly educated, it was obvious that there was not that healthy tradition of free inquiry, humor and irreverence in their background that we have in the west. There was no Jefferson, Madison, Adams in their intellectual tradition. Those who have attacked my work, whether on the right, the left, Republican or Democrat, conservative or liberal, Protestant, Catholic, Jewish or Muslim, all seem to experience comic or satirical irreverence as hostility and hate. When all it is, really, is irreverence. Ink on paper is only a thought, an idea. Such people fear ideas. Those who mistake themselves for the God they claim to worship tend to mistake irreverence for blasphemy.”

Muslim countries expect the press in Denmark to suppress cartoons that would be offensive to them, but they don’t extend the same cartoon courtesy to others that they demand for themselves. Cartoons in the Arab press are typically so ugly and racist that American audiences have never seen anything like them. Middle Eastern cartoon venom is targeted toward Israel, often depicting Jews with hooked noses and orthodox garb, sometimes with fangs and bloody teeth, often in the roles of Nazis. The Jews are sometimes shown crucifying Arabs in a “Jews killed Jesus” scenario, or enacting their own concentration camp Holocausts on their neighbors, along with their henchmen, the Americans. The cartoons are designed to be as offensive to Jews as possible, and are seen as nothing out of the ordinary by Middle Eastern newspaper readers.

Unless we defend our funny little drawings with the same zeal that we see from the victims of our irreverence, we’ll continue to see our freedoms constricted by the loud voices of those we offend.

©2006 Daryl Cagle – Daryl Cagle is a political cartoonist and blogger for MSNBC.com. He is a past president of the National Cartoonists Society and his cartoons are syndicated to more than 800 newspapers, including the paper you are reading. His books “The BIG Book of Bush Cartoons” and “The Best Political Cartoons of the Year, 2006 Edition,” are available in bookstores now.