In 1993, a former illustrator, named Pam Sommers, asked 84 well known illustrators to contribute to a book she was putting together called “Recipes for Disaster“. In essence, she wanted the illustrators to write out and then illustrate their favorite recipes. Some of the artists chose to take a conceptual approach such as a “recipe for a riot”. We had complete freedom to interpret “recipe” any way we wanted to but most of us did actual recipes of our favorite dish. I was one of those and I decided to combine my text and picture into one linocut illustration. The words became part of the picture.

My favorite food dish is Portuguese kale soup. It’s nickname is “baseball soup” because of the large baseball sized potatoes in it. It also blends the flavors of the Portuguese sausages, chourico and linguica with cabbage, lima and red kidney beans and soup chuck with the large bunch of kale. It’s a thick soup, almost like a stew sometimes although some people, like my Aunt Angie used to make a thinner watery version of it. My father and mom taught my wife, Leann how to make it and she does a PERFECT replica of the version I grew up with … except for the bugs floating in it. You see, we grew our own kale in a little garden in our yard and it was impossible for my grandmother, who lived with us and did most of the cooking, to wash out all these tiny little bugs that were embedded in the kale leaves. So, they got well cooked into the soup. When you were eating it, you could see the tiny little critters who looked like fruit flies floating in the lovely greenish soup. The first time Leann ate at our house and saw the bugs, she was a little put off by them. My father assured her that they were well cooked and perfectly harmless. I love kale soup. It is truly the best dish I have ever eaten in my life… it’s heaven. And it is truly delicious the days after it is created when the flavors have mingled and steeped. We always make a very big pot of it that lasts a few days.

I decided to do my illustration in a whaling theme because the largest concentration of Portuguese immigrants are located in my home town of New Bedford which was the greatest 17, 18 and 19th century American whaling port in the world. I decided that I would depict whalemen trying to harpoon two large potato/whales. One whaleman shouts, “Baleia Branco”… which means “white whales”,referencing Moby Dick which was written by Herman Melville who shipped out of New Bedford on a whaling ship when he was 25 years old and later wrote probably the greatest novel ever written. It was a lot of work and it was very very tiring cutting all those letters backwards… BUT, well worth it for KALE SOUP!

We just added a new cartoonist to our CagleCartoons.com newspaper syndicate and our Cagle.com site! Cristina Sampaio, the charming and brilliant cartoonist from Portugal. Here are a few samples of her work. Just another great reason for newspaper to subscribe to our syndicate! Read more about Cagle.com here. 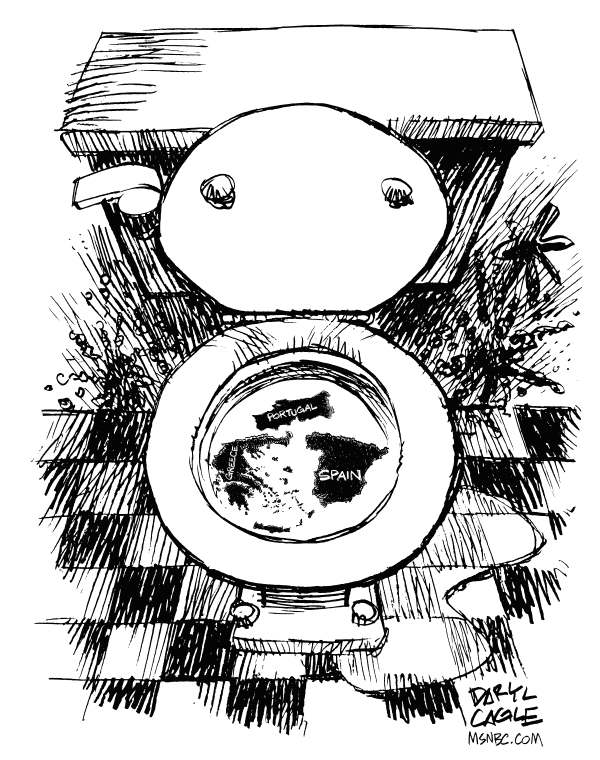