Indian cartoonist Aseem Trivedi, this year’s Courage in Editorial Cartooning Award winner (along with Syrian cartoonist Ali Ferzat) plans on turning himself over to the police in Mumbai in the next couple of days over controversial cartoons he posted on his web site that parody India’s national symbols.

Trivedi was charged in January with treason and insulting India’s national symbols, and if found guilty, he could face up to two years in prison and a fine of up to 5,000 rupees (about $100).

In the cartoon below, Trivedi took India’s national emblem of the Four Sarnath Lions of King Asoka that sit above the motto “Satyamev Jayate” (truth alone shall triumph) and re-drew them as bloodthirsty wolves on the re-worded motto “Bhrashtamev Jayate” (long live corruption): In another offending cartoon, Trivedi drew the Indian parliament building as a toilet: There is a long tradition of editorial cartoonists using symbols of states to express opinions about governments. Drawing a legislature or parliament building as a toilet is common.  I recently drew our Capitol building in Washington as a toilet: 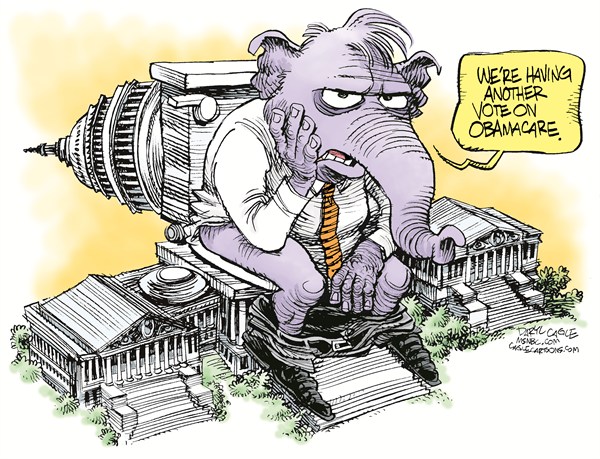 The offending cartoon below by Trivedi shows the “Mother of India” being held down by politicians and bureaucrats, about to be raped by corruption: The Indian Constitution allows for “the right to freedom of speech and expression.” Trivedi’s critics argue that while he is allowed to mock and poke fun at politicans, it is a crime to mock the national emblem, the parliament and the Indian flag.

“I am democratic. I am patriotic. I have a twenty-four year life without any charges of corruption. I am only making cartoons. … I am talking about nationalism. I love my country. I am reacting [to the corruption] in my own way. Someone is protesting. Somebody is a doing hunger strike in India. [As for me,] I am a cartoonist.” There is disturbing news to report from Iran, where cartoonist Mahmoud Shokraiyeh has been sentenced to 25 lashings for drawing a member of parliament wearing a football jersey. That’s right – he’s going to be whipped for drawing a cartoon.

While it’s nothing new for repressive governments to crack down on press freedoms and punish cartoonists, in Iran this incident seems like an escalation not only because of the harsh punishment, but because Shokraiyeh’s cartoon didn’t have anything to do with religious issues.

Even more unsettling is that under Chapter 27 of the “Islamic Penal Code of Iran,” anyone who “wrongfully” libels through print media can be subjected to “74 lashes” and imprisonment from one month to a year.

For more insight, I turned to my good friend Nik Kowsar, an Iranian cartoonist now living in Washington, D.C. who was imprisoned for depicting Ayatollah Mesbah Yazdi as a crocodile:

When writing about cartooning in Iran, I always think back to the cartoon I drew that literally changed my life. Though I had not directly portrayed an Ayatollah, by drawing a crying crocodile as the main enemy of the press and using a name that rhymed with the name of that powerful cleric, it was obvious I was messing with the most powerful class in Iran.

Cartoonists had been told not to draw Ayatollahs. Even though the constitution is silent about poking fun at clerics, judges have the power to interpret the law as they wish. By making fun of the Islamic dress code, in their point of view, you are insulting the religion, and insulting the religion is a crime based on the Islamic Penal Code. Many have lost their lives over the years by simply making fun of some symbols or making jokes about the prophet and the Imams.

In 2009, I asked (via email) Grand Ayatollah Montazeri (who died months later) if based on his interpretation of Islam, was it OK to draw Grand Ayatollahs in cartoons or not. He said that as long as you are not insulting a person, there are no objections to drawing that individual. This was sort of a “Fatwa” (a juristic ruling concerning Islamic law), though I had only asked for his opinion.

Still, no one inside Iran dares draw an Ayatollah, and until a few days ago, it was totally OK to draw cartoons of non-cleric officials. Now, Iranian cartoonist Mahmoud Shokrayeh has been sentenced to 25 lashes because he drew a caricature of Ahmad Lotfi Ashtiani, a member of the Iranian parliament, wearing a soccer jersey.

One thing interesting about Shokrayeh’s cartoon is the dark skinned mark on Lotfi Ashtiani’s forehead. In Islamic countries, this is the sign of “praying too much”. Rubbing the forehead on the ground during prayer for years and years does this. You can see it on many Islamist leaders’ faces.

Last week, while attending UNESCO’s World Press Freedom Day’s conference in Tunis, I noticed the Tunisian prime minister had been praying too too much. A Tunisian cartoonist present at the conference, drawing live on a pad, intentionally drew the dark mark on the prime minister’s forehead. Including this interesting religious symbol in his cartoon might have been seen by the Iranian court as insulting.

Now, Iranian cartoonists who are living outside of Iran, in solidarity with their colleague, are drawing caricatures of the insulted MP Lotfi Ashtian. Iranian cartoonist Mana Neyestani, who was imprisoned for his cartoons in 2006, has invited other cartoonists to draw in support of Mahmoud Shokrayeh.

In one of the cartoons, the cartoonist suggests that Mahmoud Shokrayeh’s caricature looks much better than the MP, and the MP should be lashed because of making fun of the cartoon.

It is important to note that if the ruling takes place and the judgement is not set aside, any cartoonist in Iran will have to fear at least 25 lashes on his back if he happens to insult public official.

I had a couple of questions for Nik. Why did Shokraiyeh draw the MP in a soccer jersey? The MP was interested in bringing soccer clubs to the city of Arak. Nik said, “Imagine if LA Lakers move from LA to SF and turn into SF Lakers.”

I asked Nik how the lashings work and if Shokraiyeh was in prison pending his punishment. Nik responded to say that Shokraiyeh was not imprisoned and the lashings are done by appointment; Shokraiyeh will be called and given a time to come in to get his lashings, then he can leave (kind of like a trip to the dentist for a root canal, I guess).

Here are some of the cartoons drawn by Iranian cartoonists in solidarity with Mahmoud Shokrayeh over the lashing decision: