Here is my cartoon as it appeared today in the Los Angeles Daily News.  It is rare for me to see my cartoon in the local newspapers in the vast editorial cartoon desert that is Los Angeles. The Los Angeles Times, a newspaper with a rich history of editorial cartooning, doesn’t run editorial cartoons and has no staff cartoonist anymore (occasionally they will run a commissioned illustration from a freelancer with a political theme). The larger daily newspapers surrounding The LA Times are part of the Southern California News Group (SCNG) which includes my local Los Angeles Daily News, The Pasadena Star-News, The Riverside Press-Enterprise and The Long Beach Press-Telegram among others; these papers sell advertising more effectively as a group and prepare their editorial pages centrally from The Orange County Register, a practice that is becoming more common. The same is true with the Bay Area News Group (BANG) up North, with their central editorial page staff at The San Jose Mercury News.

Newspapers are shutting down editorial page staffs faster than they are dropping editorial pages and this sometimes works to our advantage. When SCNG and BANG consolidated all of their newspapers’ editorial page staffs, we picked up newspapers in the groups that we hadn’t been able to sell to before, so that all the papers in the groups could run the same content. A similar thing happened recently with McClatchy in North Carolina and we picked up two new papers, The Richmond News-Leader and The Durham Herald-Sun so that they can run a common weekly round-up of cartoons, prepared centrally by our brilliant cartoonist Kevin Siers at McClatchy’s The Charlotte Observer.

Newspapers will also continue to consolidate and we’ll see editorial page staffs continue to be cut, with regional groups consolidating their editorial staffs from multiple local papers into central locations; ironically, this is good for Cagle Cartoons as our content is so much better than competing syndicate packages that we continue to pick up more papers than we lose to the consolidation trend –which is a little silver lining on a big dark cloud. 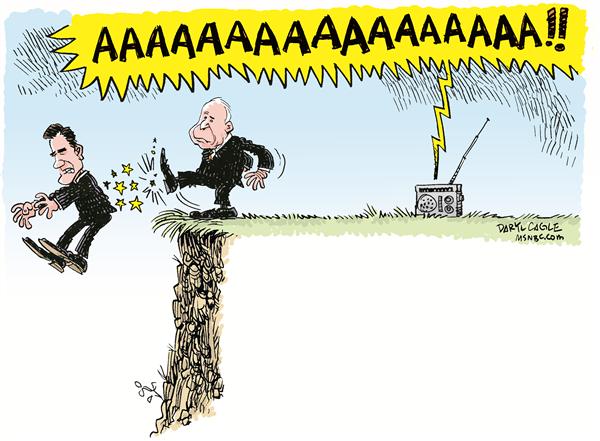