People seem to like it when I show my sloppy drawing process, so here it is again with my last three cartoons.

The most recent cartoon has Obama in the pocket of greedy bankers. Â I draw with a hard pencil fairly quickly on 11″x17″ paper. Â I like a hard pencil because it encourages me not to render and get bogged down in details. Â I first thought I would have Obama shaking his fist, and that didn’t work – in fact, my first Obama attempt didn’t look good at all and I drew over it with a sharpie marker (which is quicker than erasing).

Next I did the finished line art, in pencil on a piece of vellum over the rough sketch. Â The black and white line art is how most people see the cartoon in the newspaper. Â One thing I notice with student cartoonists that that they shy away from using a lot of black. Â Heavy blacks stand out on the page and are lots of fun – don’t be afraid of black.

Then I color the image in with Photoshop, with the black lines as a layer over the color layer. Â This is for the few newspapers that print color on their op-ed pages and for the web. Â I try to keep my colors bright and simple – when I do anything with textures or colors that aren’t clean and bright, I get complaints from editors who say the cartoons look muddy when they are printed. Â Newspapers have lousy printing and the cartoons have to work for the worst of them.

I drew the cartoon below when Scott Brown won the senate seat in Massachusetts – an unpleasant day for Obama and the Democrats. Â The first decision I had to make was whether to draw Obama or a Dem donkey under the Massachusetts rain cloud – either would be fine, but since Obama’s agenda was taking a hit, and I like to bash Obama, I went with the president. Â Here’s the rough sketch. Â I printed out a map of Massachusetts that I found on the web and taped it to the paper.

Then I traced it with pencil on vellum, scanned at high contrast so it looks like I drew it in ink. Â This is what most people see in the newspaper.

And here is the color version from our site.

This last one, from last week, is bashing the media in Haiti. Â I wasn’t happy with the vultures in my rough sketch, and I drew over them in purple Sharpie Marker, quick and dirty. Â Nobody is supposed to see this.

Then I trace it nicely on vellum and scan as line for the newspapers.

And I color it in Photoshop … 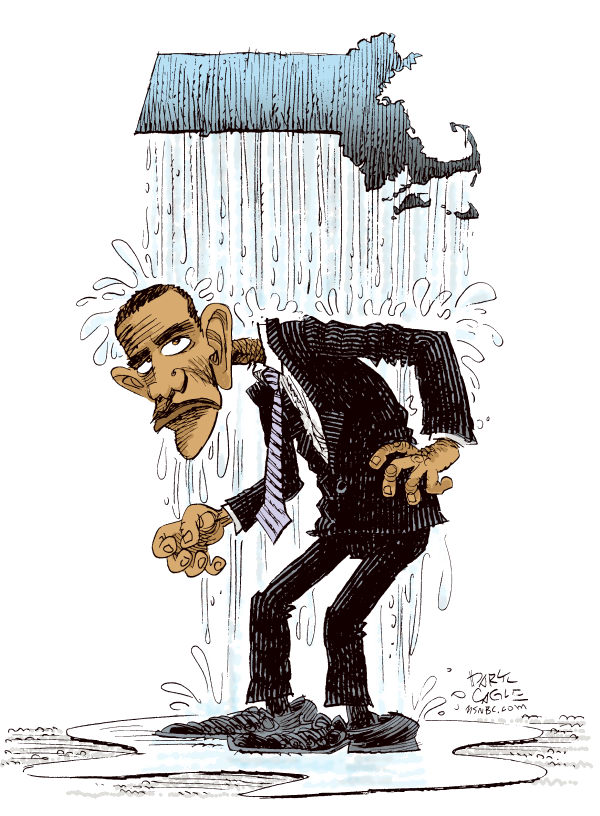