Every Monday, we collect the best cartoons of the week drawn by some of the world’s top political cartoonists, and jam them into one big, terrific cartoon slideshow.

Check out a different perspective of world events and view our Best World Cartoons of the Week cartoon slideshow.

Readers were divided about this Steve Jobs cartoon by Dutch cartoonist Hajo de Reijger. Some of you thought it was funny, even poignant. But most thought it was tasteless and unnecessary.

“I didn’t know Steve personally,” Hajo emailed me.  “I know his products, and they’re great!  But for me Steve Jobs is a human being that died. He was not the Messiah. His image did not appear on my toast this morning.”

We received a lot of feedback about it, and here are just a sampling of your comments:

Raul: I don’t like it. It shows a poor taste. However, is easy to see the irony on it. I think Jobs deserves a clever attempt to mock him.

Dennis Jasinski: Death is a fact of life….one that Steve Jobs himself faced with humor and tenacity. My favorite comment on his death was iSad.

Nina Maya Cording: I think it’s reducing Steve Jobs to mainly those 3 devices he made popular in the last few years although it was so much more.

Nicola Stratford: Oh, come on. Our culture is so PC these days. If the cartoon has read igone or ipassed or some other euphemism, I’ll bet there’d be no debate. idead is the truth using the word that means just that; it’s not disrespect.

Dee Dee Merritt: If your living you are going to die, dont take it to seriously, I like it.

Clvex: It’s neither fair nor foul because there’s no real joke there. It’s not harsh, it just fails to find a punch line in that final panel. It’s a non sequitur.

Jennifer Bourne: I thought it was funny and poignant at the same time: he pioneered wonderful inventions and now he’s gone.

We’ve had a lot of Steve Jobs obituary cartoons come in. And I mean a lot (view them all here). Obituary cartoons frustrate political cartoonists – most hate to draw them, but readers love them. With a public figure so important to modern culture and universally liked and admired, it’s almost obligatory that a cartoonist notes his passing.

It’s interesting to track our analytics and see which cartoons are getting shared more, and which ones are the most popular. According to our numbers, here are the five most popular Steve Jobs cartoons from the last couple of days.

RELATED: View all of our Steve Jobs RIP cartoons |  Vote on the best Steve Jobs cartoon

The big news this week was the shocking announcement of the death of Apple co-founder Steve Jobs. We also had some Chris Christie drama, witnessed Herman Cain’s ascent and saw the growth of a little thing called Occupy Wall Street.

Want to get caught up? Then check out our Best Cartoons of the Week slideshow.

Last night, the world was shocked with the news that Steve Jobs, co-founder and former chairman of Apple, died at the age of 56. Jobs has revolutionized the world and become a tech icon, and in recent years he gave us items like the iPod, iPhone, iPad and iCloud.

Hold on to your iPads — Apple has announced that its CEO and co-founder, Steve Jobs, is resigning due to health reasons. What this means for the future of the world’s most valuable company is unclear.

Check out what cartoonists think of this huge announcement, as well as their jabs at Jobs over the years, with our new Steve Jobs Resigns cartoon slideshow. 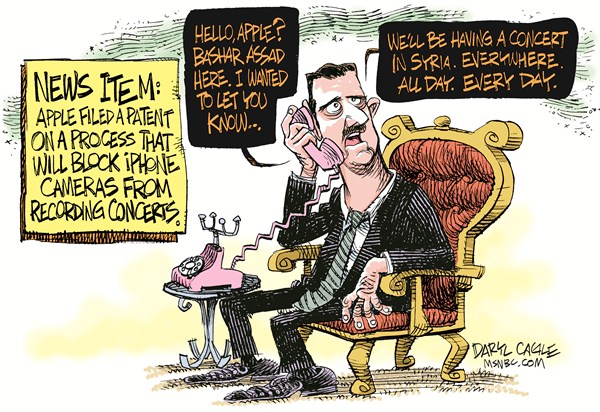