Editors complain about cartoons that are too raunchy. The cartoons have gotten a lot dirtier with the rise of Trump. Even though newspaper editors choose which cartoon they want to print, many complain loudly that we even have raunchy cartoons available that they pass over and never print. More importantly we have gotten complaints from schools who want to use our sites in the classroom, so we decided to start cleaning up the cartoons by killing cartoons that have graphic sexual depictions and curse words. Of-course, the other newspaper syndicates have always done this, but as a cartoonist run syndicate I suppose I’ve been a little lax.

One of the first cartoons that got caught up in our new dragnet is the cartoon below by conservative cartoonist, Sean Delonas. My editor, Brian Fairrington, killed the cartoon below because of a bare-breasted “naked lady” in the lower right corner. I came to this a little late and asked Sean what the story was behind the topless lady. Sean told me that was no lady, that’s Teddy Kennedy. Why the boobs? Sean simply imagined that Teddy’s chest would look like that.

And why is Teddy Kennedy in Hell? Because of Chappaquiddick? No. Sean tells me that there’s no real reason Kennedy is in hell, Sean just he likes to put little Teddy Kennedys into his cartoons and he has done it for years. I guess I didn’t notice.

Sean worked for many years as the cartoonist for the New York Post; he tells me that the folks at the Post really didn’t like Kennedy because of his role in forcing Rupert Murdoch to sell the Post in 1988. Sean’s editors at the Post encouraged him to bash Teddy Kennedy in his cartoons as often as possible, and Sean made it a regular habit that he continues. We hear from editors who want more “pro-Trump” cartoons – but editorial cartoons are a negative art form. Cartoons that support anything are lousy cartoons. And there are few conservative cartoonists to begin with. I drew what could be considered a “pro-Trump” cartoon below. 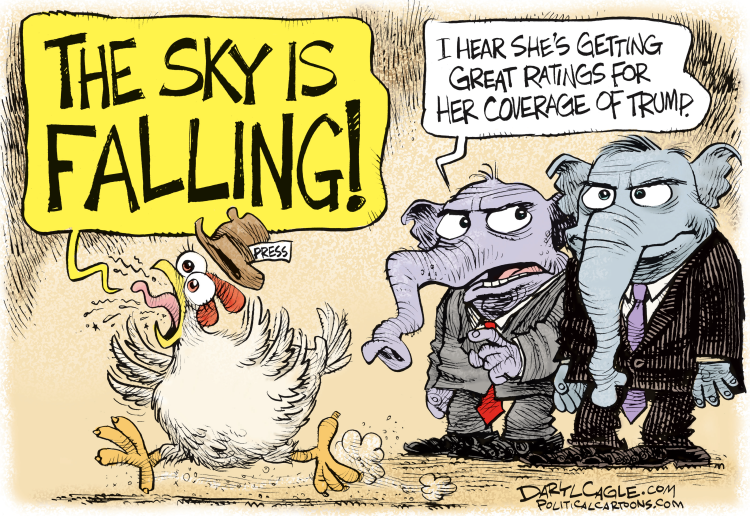 I think this is about as close as we’re going to get to “pro-Trump” cartoons over the next four years – cartoons that bash third parties, like crybaby Democrats or media bashing cartoons like mine.

I drew this one as a live stream on Twitch.tv – you can watch in the videos below. The first one shows me doing the rough sketch and final line art …

And the next video shows me coloring the cartoon in Photoshop …

We just added a new cartoonist to our CagleCartoons.com newspaper syndicate and our Cagle.com site! Cristina Sampaio, the charming and brilliant cartoonist from Portugal. Here are a few samples of her work. Just another great reason for newspaper to subscribe to our syndicate! Read more about Cagle.com here.