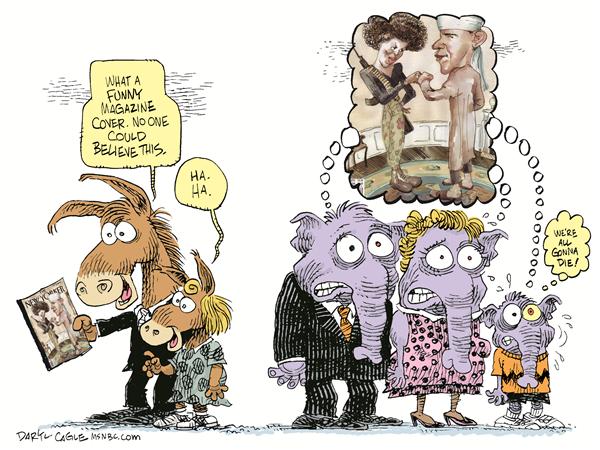 Why The New Yorker’s Obama Cover is a Lousy Cartoon

Cable news channels and bloggers are buzzing about The New Yorker magazine cover featuring Barack Obama dressed in Muslim garb and Michelle Obama with an afro and machine gun, doing a “terrorist fist bump” in the Oval Office, while an American flag burns in the fireplace. The cartoon by Barry Blitt drew immediate condemnation from the Obama and McCain camps.

In an interview on the Huffington Post Web site, New Yorker Editor David Remnick argues, “Obviously I wouldn’t have run a cover just to get attention — I ran the cover because I thought it had something to say. What I think it does is hold up a mirror to the prejudice and dark imaginings about … both Obamas’ … it combines a number of images that have been propagated, not by everyone on the right but by some, about Obama’s supposed ‘lack of patriotism’ or his being ‘soft on terrorism’ or the idiotic notion that somehow Michelle Obama is the second coming of the Weathermen or most violent Black Panthers. That somehow all this is going to come to the Oval Office.

“The idea that we would publish a cover saying these things literally, I think, is just not in the vocabulary of what we do and who we are… We’ve run many many satirical political covers. Ask the Bush administration how many.”

Cartoonist Barry Blitt defends the cover by saying, “It seemed to me that depicting the concept would show it as the fear-mongering ridiculousness that it is.” So the cover cartoon is simply an exaggeration of the allegations against the Obamas.

There are rules to political cartoons that allow cartoonists to draw in an elegant, simple, shorthand that readers understand. Exaggeration is a well worn tool of political cartoonists; we use it all the time. I’ve drawn President Bush as the King of England, to exaggerate his autocratic tendencies. I’ve drawn the president as a dog, peeing all over the globe to mark his territory. I exaggerate every day, and I don’t expect my readers to take my exaggerations seriously — but when I draw an absurdly exaggerated political cartoon, I’m looking for some truth to exaggerate to make my point. A typical stand-up comedian will tell jokes about things the audience already knows or agrees with, “it’s funny because it’s true,” or true as the comedian sees it. It is the same for cartoonists — our readers know that we’re exaggerating to make a point we believe in.

Cartoonists have a great advantage over journalists in that we can draw whatever we want. We can put words into the mouths of politicians that the politicians never said. Cartoons can be outrageous in their exaggeration; we draw things that never happened, and never could happen — but we have a contract with the readers who understand that we’re drawing crazy things that convey our own views. The New Yorker’s Obama cover fails to keep that contract with readers. Cartoonists don’t exaggerate anything just because we have the freedom to do so; we exaggerate to communicate in a way that our readers understand.

There is no frame of reference in The New Yorker’s cover to put the scene into perspective. Following the rules of political cartoons, I could fix it. I would have Obama think in a thought balloon, “I must be in the nightmare of some conservative.” With that, the scene is shown to be in the mind of someone the cartoonist disagrees with and we have defined the target of the cartoon as crazy conservatives with their crazy dreams.

I reserve the right to be as offensive as I want in my cartoons, and to exaggerate however I please — but I want my cartoons to work, to be good cartoons. A cartoon that fails to communicate its message in a way that readers understand is nothing more than a bad cartoon.