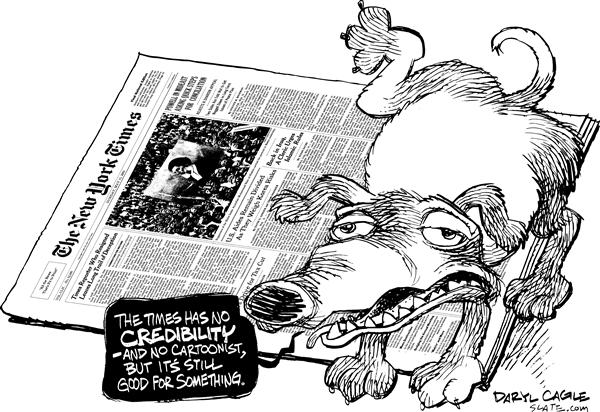 What The Times proposed was having all the best cartoonists submit finished cartoons to them on Fridays, for publication in their Sunday edition. The Times wanted the cartoons to be exclusive to them; the cartoons could not be reprinted elsewhere. The Times would pick one of the cartoons and pay the winning cartoonist a paltry $250, sending him an exclusive contract only after he wins the selection contest; the dozens of losing cartoonists would get nothing. Of course, the cartoonists reacted to this offer with disgust, and the Internet has been buzzing with cartoon disdain for the arrogant New York Times the past few days.

The Times is arguably the most prestigious newspaper, and they have been without a staff editorial cartoonist for many decades – a sore spot for our beleaguered editorial cartooning profession which has been losing jobs at about the same rate as newsroom journalists, as newspapers’ fortunes have declined. Before dropping editorial cartoons entirely, The Times ran a weekly “round-up” of syndicated cartoons under the title, “Laugh Lines,” in which they selected funny cartoons that were like Jay Leno jokes, expressing no strong opinion, but good for a smile. Cartoonists suspected that the new cartoon in the Times would be the same, encouraging cartoonists to compete for The Times’ favor by submitting opinionless, funny cartoons that would further “dumb-down” the profession. The Times would also remove the artist’s signature from their editorial cartoons, an annoyance to the cartoonists. 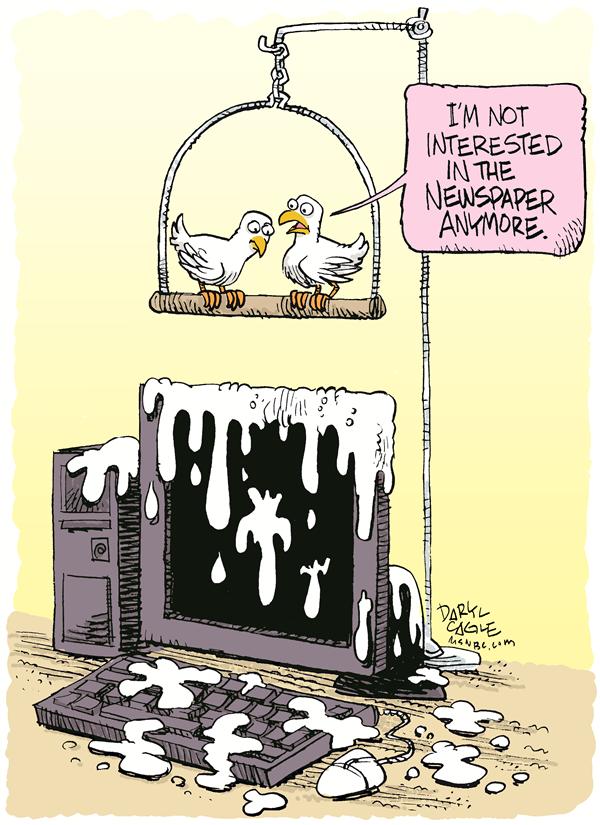 Newspapers have gotten used to the idea that editorial cartoons are cheap, because of “syndication” where cartoonists distribute their cartoons to hundreds of newspapers through “syndicates” (businesses that charge very little for the cartoons). But syndication is no extra work for the cartoonist, distributing only cartoons that the cartoonist has already drawn for his own newspaper, and the syndicated cartoons are “non-exclusive,” that is, they can be purchased and reprinted anywhere, unlike The New York Times proposal for exclusive cartoons for only $250, with a contest between cartoonists who would spend time submitting and making changes for The Times’ editors, with only one cartoonist having his work printed and getting paid.

It is a sign of our times, of how far our cartooning profession has fallen, and of how callously editors have devalued our work that the Times would solicit cartoons under these conditions – and also a sign of how arrogant The New York Times has become, to assume that top cartoonists would participate. There has been some blowback, with prominent cartoonists writing letters to The Times dissing the offer and refusing to participate; one of my favorites came from award-winning Canadian cartoonist Cam Cardow who wrote:

I’m told that The Times is now “revisiting the policy.” I have a few suggestions for The Times:

1. Try reprinting the best syndicated cartoons again, with signatures of the artists in place, and without the title, “Laugh Lines,” so that cartoons which make a reader cry or think might get equal play in The Times as the little jokes.

2. Or, if you want an exclusive cartoon, trust one cartoonist and pay him or her fairly. Find someone whose point of view is in line with The Times’ editorial stance; commit to that cartoonist and give him the same freedom that you do with your columnists. After all, editorial cartoonists are graphic columnists, except that our work is more powerful than the words of columnists. Nobody tears out a column and sticks it to their refrigerator.

I was pleased to read this letter from National Cartoonists Society President, Tom Richmond, to the New York Times today, opposing their editorial cartoon scheme. Visit Tom’s blog to read more of his comments surrounding the NCS position on the issue.

I read with mixed emotions your letter of February 6th to a selection of professional editorial cartoonists calling for submissions for a new editorial cartoon feature in the Sunday Review section of the New York Times.

On one hand, I was pleased to see that the Times was bringing back an editorial cartoon to the Sunday Review. In this day of dwindling editorial cartoon voices in the press, such an addition, particularly in a publication as respected and read as the New York Times, is very welcome.

I was dismayed, however, in the way in which the cartoons were to be submitted, chosen and paid for. The editorial cartoonists are expected to submit finished cartoons completely on spec, and your editorial staff will chose one for publication each week. The submitting cartoonists are to agree that, if chosen, their cartoon becomes an exclusive to the Times, not to be reprinted anywhere. The cartoonist who’s work is chosen gets paid $250, and those who do not get chosen get nothing.

The work of creative professionals today is under siege, being constantly devalued through a multitude of fronts, not the least the internet. Writers, artists, cartoonists, designers and other creatives who are attempting to make a living with with their talents and hard work face increasing assaults by “clients” who seem to expect them to do work for either very little pay, or only the hope of being paid. Being asked to do spec work is nothing new in the cartooning world, but when it comes from a publication like the New York Times and it is specifically aimed at some of the industry’s top professionals, it is alarming.

The Times is arguably the most well-known and prestigious newspaper in the United States. It should be championing and supporting the work of the industry’s top professionals in all facets of journalism—reporters, columnists, feature writers, editorialists, and—yes . . . cartoonists. An initiative like this does the opposite. It contributes to the devaluation of the work of editorial cartoonists not just in the offer of extremely low pay and the submission of finished work without the expectation of ANY pay, but in the very nature of editorial cartoons as an individual voice of real opinion. Editorial cartoonists are visual columnists who have specific voices, and “competitions” like this discourage that individuality while encouraging the pursuit and of whatever joke might give the jury the biggest chuckle of the week. To stage such a competition among an amateur public would be one thing, to ask a specific group of well-established and professional editorial cartoonists to do it is quite another. That is a slap in the face to their work and profession.

While I applaud your desire to once again feature individual editorial cartoons in the Times, I sincerely hope you will rethink this approach. It would behoove the Times to conduct a search among the countries best editorial cartoonists for one that has a voice that is in keeping with the editorial position of your newspaper, and then commission them to produce a weekly cartoon for which they are paid a living wage for exclusive rights. Such a change would support the professional of cartooning and journalism, and be in keeping with the reputation of theNew York Times as one of the world’s leading newspapers.

Thank you for your time and attention,