Leave it to our conservative rabble-rouser Gary McCoy to rile up our readers yet again. Fresh off the heels of his Sandra Fluke cartoon controversy, McCoy’s most recent cartoon calls out the President for politicizing the murder of Florida teenager Trayvon Martin… 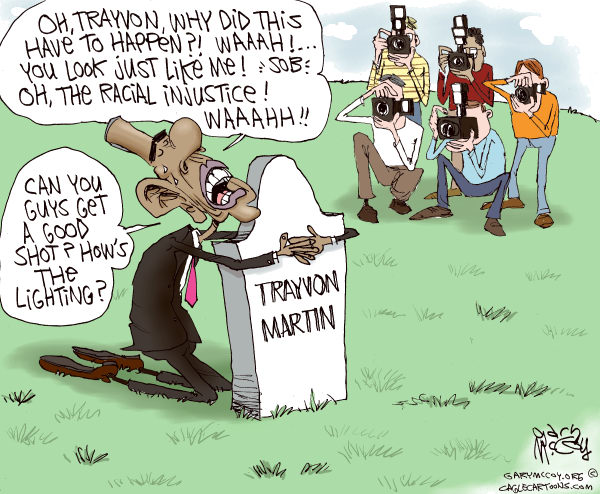 I’ve asked Gary to write something about the cartoon, and here’s what he sent me:

And so it goes… I do a cartoon on President Obama politicizing the Trayvon Martin death, and thousands of spastic, hyperventilating leftists reached for their inhalers in unison, collectively raising CO2 levels, and melting the polar ice caps. All the while I celebrate their anger sitting in my comfy arm chair and watching the ice melt in my glass of scotch, with a warm, smug grin on my face.

Why is it that my conservative editorializing rubs liberals raw like Rosie O’Donnell’s bicycle shorts? What we have here is our country’s most narcissistic president ever, unable to keep from making every major story about him if at all possible (unless it’s high gas prices, a still sluggish economy, high unemployment, etc.). The Trayvon Martin story is about a black teen that was tragically shot by a neighborhood watch volunteer. Those are about the only facts we know for certain. The shooter, Mr. Zimmerman has not been tried in any court of law to have been found guilty of anything. As of now, we do not know if he was justifiably defending himself or acting outside the rule of law. Yet every Supreme Court Justice wannabe is posting with certainty like this is the next Dred Scott case. The bizarreness of Obama stating that if he had a son, he would look like Trayvon is nearly unfathomable. Yes, Mr. President, we know you’re black (half black technically), but really, what’s your point? Mr. “let’s all come together, and not make race an issue” can’t seem to keep from waving his giant, novelty, double-laminated race card whenever he smells political opportunism wafting in the air.

I can always tell when my critics have no substantive argument to make in their defense, for that’s when the shallow charges of “horrible cartoonist” and “racist” start to fly. The latter of which is a hilarious label on a guy who married outside his race and has a bi-racial child. But I guess when you’re tutoring a kindergarten class, you’ve got to leave the slide rule at home and bring the crayons instead.

Here are what some readers had to say about the cartoon:

Betty C.: “Don’t see any humor in this cartoon! Disgusting to say the least about the content!”

Debbie C.: “This is a racist hateful cartoon…there is freedom in this country to be able to say things like this, however, this is a bad bad cartoon.”

e-socrates: “Oh no, politically incorrect speech! Time for the jackbooted boycott vigilantes to put a stomp to this! Go get ’em Blackshirts!”

Bridget R.: “I’ll play devils advocate and ask anyone to give me an example of other presidents talking in the media about a local murder case. I’ll wait.”

Tom H.: “This is one of the most disgusting cartoons I’ve ever seen. The cartoonist should be deeply ashamed of himself.”

Nomorenicksleft: “If Zimmerman had only ordered a drone strike on Trayvon without due process, Obama would have rubberstamped it.”

WhiteDawg: “Breitbart was a despicable individual, but at least he came up with some of his own material. McCoy is just trying to illustrate Rush Limbaugh’s thoughts as offensively as possible.”

What do you think of the cartoon? Let us know by commenting below, or leaving a note on our Facebook page.