Mets fans are upset at the St. Louis Post-Dispatch and their cartoonist, R.J. Matson (who I syndicate nationally in our Cagle Cartoons package) for labeling the first no-hitter in Mets history with an asterisk.

Saturday’s Post-Dispatch led with Mets pitcher Johan Santana on the front page of its sports section, but was quick to point out a missed call on an apparent double hit by former Met Carlos Beltran. The headline with an asterisk read:

Once the bristling objections of the Daily News reached Matson, he went to the drawing board to sum up his thoughts about those whiny Mets fans who can’t seem to take a joke. 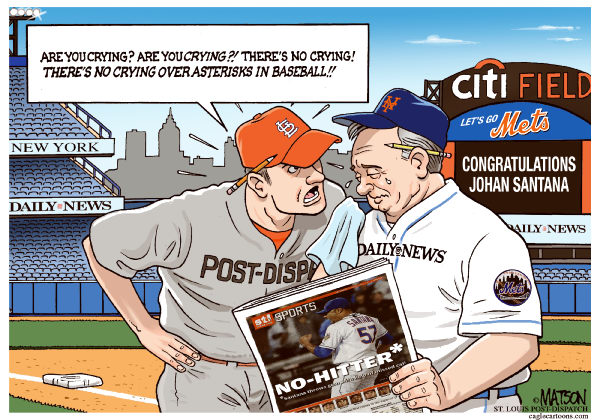 “I lived and worked in New York City for 20 years before coming to St. Louis and I did a lot of freelance illustrations for the Daily News,” Matson told me via e-mail. “During that time I got to know the great [Daily News sports cartoonist] Bill Gallo, and I can’t imagine he would have ever wasted ink whining about an asterisk.”

The editors of the Post-Dispatch landed a jab of their own in an editorial that appeared in today’s paper:

We’re used to these things. The late Bob Forsch pitched a no-hitter* for the Cardinals in 1978 that got its asterisk thanks to a controversial official scorer’s call by the Post-Dispatch’s Neal Russo. Five years later Mr. Forsch pitched a clean no-hitter, thus giving this one Cardinals’ pitcher twice as many no-hitters as all the Mets in history.