Sept. 19, 1975, I was hunched over my drawing board in my office at the Journal Herald in Dayton, Ohio, trying to come up with an idea for a political cartoon on a slow news day when Managing Editor Bill Worth charged into my office and said, “Glatt’s been shot. They’re going to arraign him in a few minutes at the Federal Building. Get over there and draw the shooter when they bring him into the courtroom.” Who? Oh, right, Dr. Charles A. Glatt Dayton’s federally appointed desegregation manager.

I was at the paper less than a month, my first full-time job as a political cartoonist. I barely knew where the bathroom was. Everything was new to me, the paper, the newsroom, the city and busing. Dayton was under a court order to desegregate its schools and busing was the federal plan. My family was in the process of moving from Ft. Wayne, Indiana, to Centerville, a suburb south of Dayton. Neither the city of Ft. Wayne, nor Centerville was busing school children. This was all new to America and almost every white person I knew hated it.

“Next door,” said Worth.

I grabbed my sketchpad and a black Prismacolor pencil and followed the reporters. It took only minutes to get there.

The courtroom was dimly lit and empty except for the press and the judge. The shooting had just happened down the hall in Glatt’s office. The door opened and the murderer entered, flanked by several marshals and a lawyer. My heart was racing. I’ve never seen a murderer in the flesh before. I had only seconds to get his likeness. I’ve never even been in a courtroom before and now – it was “look, see, draw.” I had maybe four seconds from when I saw the defendant in profile to when he turned his back to me to face the judge. His image is stamped on my brain. I captured his likeness in an instant and the next morning, my drawing was on the front page. The guy turned out to be serial killer, Neal Bradley Long, a filling station attendant. He shot Glatt four times with a handgun and later was found guilty of killing Glatt and four black people in the area over the past few years. The hubbub surrounding busing in Dayton quieted down after that. A new desegregation manager was appointed, busing continued, magnet schools were organized and the community schools were integrated. Long was tried, convicted and sentenced to two consecutive life terms while white people fled to the suburbs. Dayton ended the busing program 25 years later.

Most of my forty years in the newspaper business were filled with habitual rituals, creative challenges, daily deadlines and plenty of laughs. They tend to run together in a very long timeline, but some days stand out, like Sept. 19, 1975, the first of many more to come. 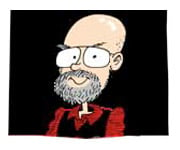