The story of Arnold Schwarzenegger and his “love child” dominated a busy news week. Check out our big Week in Political Cartoons slideshow to get caught up the country’s best political cartoonists think about everything from Newt Gingrich’s implosion to Donald Trump’s decision not to run for President.

Arnold Schwarzenegger may be bearing the brunt of our 24-7 news cycle with the revelation that he fathered a “love child” with a former household staffer 10 years ago, but he’s hardly the first politician to admit to such a scandal. From Jesse Jackson to John Edwards, numerous politicians have fallen victim to their own selfish urges.

And some have even survived politically.

During the 1884 presidential election, then New York governor Grover Cleveland admitted that he had fathered a child with a store clerk while unmarried. Frank Beard, a widely known cartoonist at the time, drew this infamous cartoon of a baby crying, “I want my Pa!” on the cover of The Judge magazine.  Quickly, Cleveland’s opponents took up the cry and started bringing children to Cleveland’s rallies to chant: “Ma, ma, where’s my pa?”

However, Cleveland went on to win the Presidency, and following the electoral victory, the “Ma, Ma …” attack phrase was countered with the slogan, “Gone to the White House. Ha! Ha! Ha!”

From Our Archives: The Groping Governor 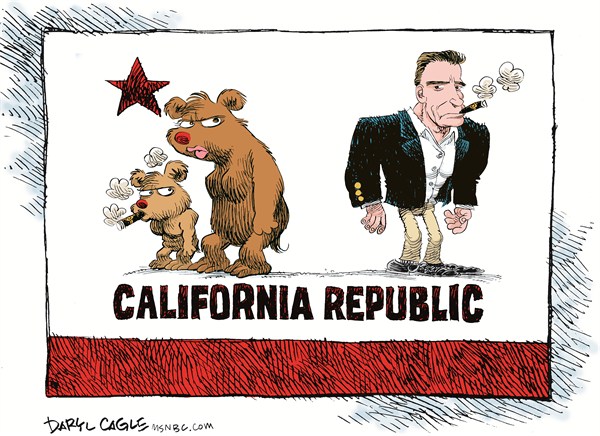 I was interested to read that my former California Gov. Arnold Schwarzenegger fathered a child more than 10 years ago outside of his marriage to Maria Shriver. It is fascinating that someone who attracts as much media attention as Schwarzenegger was able to hide something like this.  Here is my new Arnold Love Child cartoon …

Looking back at our cartoon archives, we have a lot of terrific cartoons about Arnold. In fact, Cam Cardow of the Ottawa Citizen drew a cartoon back in 2003 showcasing Arnold’s “love child.” 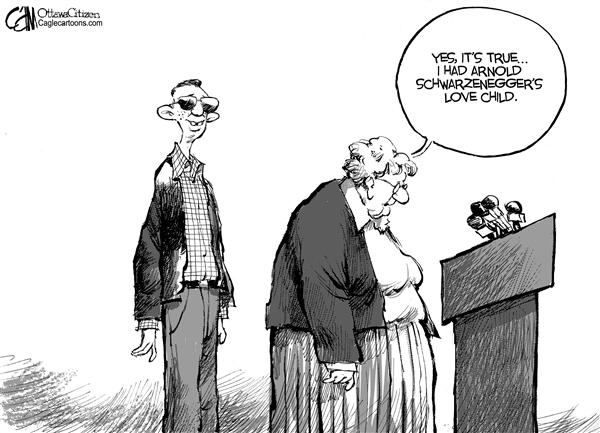 The Los Angeles Times supported Gray Davis and came out with the story of Arnold groping women just before election day. Here was my take then: 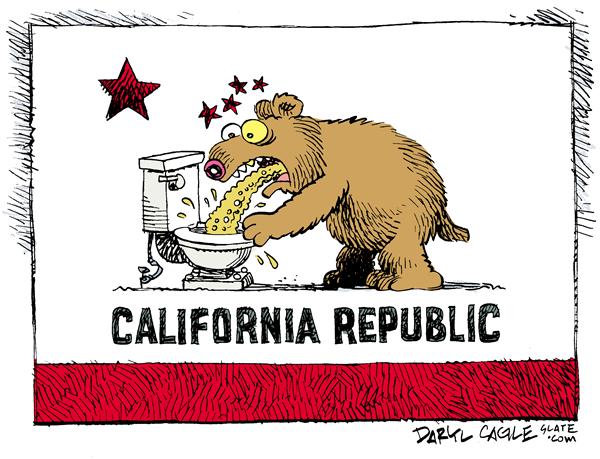 Arizona cartoonist Brian Fairrington touched on the groping issue in this cartoon about Schwarzenegger’s gubernatorial victory:

He also drew a funny cartoon about Arnold’s famous gap:

Regardless of the rumors, our former first lady, Maria Shriver defended Arnold during the campaign against allegations of groping and sexual abuse. Here’s Austrian cartoonist Petar Pismestrovic’s take on Austria’s favorite child …

Pismestrovic draws a terrific Arnold for Arnold-crazy Austrians. Here are a couple more of his caricatures: 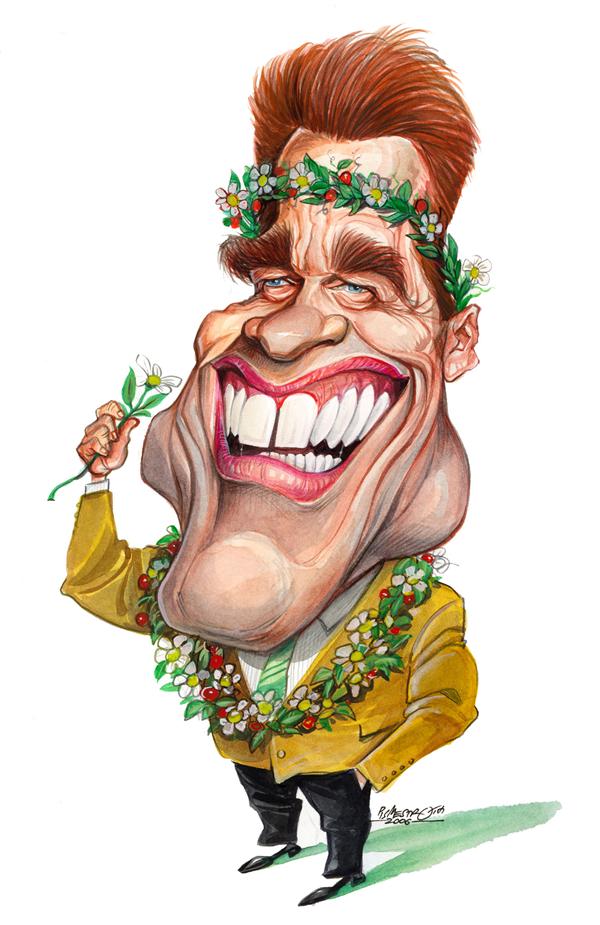 I think Ottawa Citzen cartoonist Cam Cardow sums it all up with Arnold’s bumper sticker: 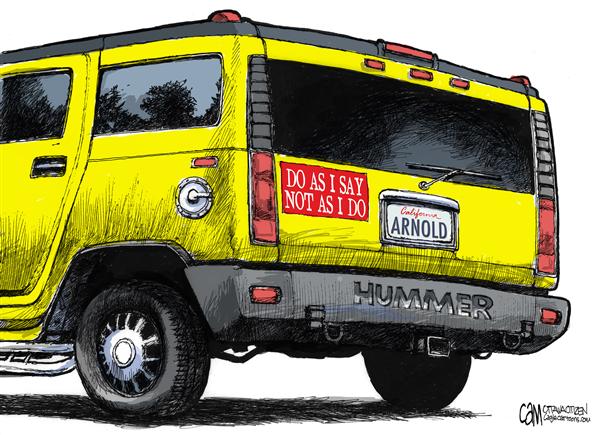 Everyone here knows how much I like to abuse the poor bear on California’s flag.

Well now my buddy, Slovak cartoonist Martin “Shooty” Sutovec, has decided to draw a California flag cartoon of his own. That poor bear has suffered mightily at the hands of cartoonists. 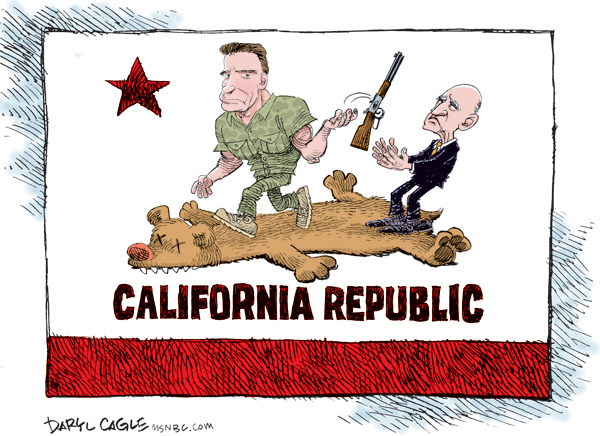 The Vatican just announced a brand new, modern set of seven deadly sins to supplant the old seven sins which have grown pretty tired through the years. The old seven deadly sins: lust, wrath, gluttony, sloth, greed, pride, and envy were proclaimed by a sixth century pope and were made famous by Dante in his “Divine Comedy” and by Brad Pitt and Morgan Freeman in the movie “Seven,” which was a pretty darn scary movie.

The new sins are:

3. The disparity between the very rich and the very poor

The church describes the new sins as social in nature and “a corollary of the unstoppable process of globalization.” Societies have experience regulating social issues, like pollution, and that experience gives us a great leg up on regulating the other sins.

California’s Governor Schwarzenegger likes to fly his jet home, from Sacramento to Los Angeles, each night after work, so he can spend time with his family. Schwarzenegger creates a lot of pollution in his daily commute, but the governor buys carbon-offset credits from businesses that are more environmentally friendly than they need to be, selling their eco-surplus back to the governor. Al Gore does the same thing, reducing his big carbon footprint from his private flights and his big houses by buying carbon-offset credits. It’s cool. Offsets work. It’s the free-market solution and the system works for other sins too.

In fact, the system applies to all of the deadly sins. This afternoon I watched New York Governor Eliot Spitzer squirm, under the glare of his dowdy wife, at a one-minute press conference about his being caught as the customer of a high-priced hooker. I’ve never used the services of a prostitute myself, and I think I deserve some credit for that – credits that I should be able to sell to Governor Spitzer at a time when he really needs the “hooker-offsets.”

In fact, I personally fare much better with this new set of seven deadly sins than I did with the first set. As an editorial cartoonist, I create very little pollution – I even use those curly light bulbs. Given the number of pencils I use, I probably haven’t killed any more than one tree in my whole career. Two at the most. Not counting the paper.

I don’t cause social injustice (not much anyway); I’m not a pedophile; I don’t have abortions; I don’t abuse drugs or do any genetic engineering. I score so well on the new sins test that I should be awarded plenty of offsets that I could sell back to the Vatican to offset their pedophile priest problem.