Here I sit in my new Nashville, Tennessee apartment, trying out a new restaurant for every meal, and finally drawing cartoons.  I finished my second cartoon in Nashville today – a busy, crowd scene cartoon about Obama and foreign aid to Egypt.  Here is my rough pencil sketch. I drew this first with a light, hard, #5 pencil to get the people in the crowd into the right composition, so they are interacting with each other, have expressive body language, their faces aren’t obscured, the feet and arms are on right … all those details need to be thought through for each figure; better to do it in a sketch than on the fly in in finished art.   The line art is below.  I debated whether to go with just line for the black and white version that most people see in the newspaper.

Here is the gray-scale version.  I thought it read a bit better with tone.  I do the gray-scale separately.  It isn’t just a gray version of the color cartoon.

I usually avoid doing crowd scenes.  When I was an illustrator, I used to do a lot of crowd scenes.  I think art directors would sit in a brainstorming meeting and come up with a list of too many things that they needed to put in an ad – so they would call a cartoonist to jam it all into one piece of art.  Cartoonists get these jobs because the lists are too long, so the art has to be crazy. In fact, crowd scenes are usually not very effective compositions.  The most effective compositions show powerful character and expression, which is better done with large figures and faces.  With too many little figures in a crowd, the power of the expressions and body language are lost to tiny details.  That said, I hate to admit that sometimes a concept calls for a crowd scene.

This one suffers from low resolution on the web, and will look much better in print, with crisp lines and texture in the tiny characters.  Here is a detail. One funny thing about cartoon crowd scenes; when readers send me unsolicited ideas for cartoons, the ideas are almost always for crowd scenes.  The reader wants to say so much in his cartoon idea, that he comes up with a list of junk to include, just like the sloppy advertising art directors.  Some ideas I get start with, “draw an army on the left, and another army on the right …” or the reader will write, “fill the sky with helicopters …” Not only am I too lazy for this, all the tiny details would be ineffective in the composition, and the cartoon would be lousy.  For people who think in words, not images, these list-cartoons make perfect sense; to cartoonists, they are nonsense.

The previous cartoon is another Egypt/Arab Spring drawing.  Here’s the rough pencil sketch.  Notice that I drew Obama too low and made a note to move him up.  I make lots of mistakes.  Mistakes are easy to fix.  Better to make lots of mistakes and have no fear of mistakes – at least in cartoons.  I wouldn’t give that advice to my dentist. Here is the line art version that most people will see in the newspapers.  No gray version for this one.  I like to keep them as line art if possible – there is something more elegant about not having to rely on tone.

And here is the color …

This cartoon is similar to one I drew a week earlier, with Obama and the Republicans.  I like the yellow ochre texture background for dirty fighting scenes.

Obama doesn’t actually wear pinstripe suits.  He wears plain black and blue suits, which are no fun to draw.  So I take some artistic license.  This recent Detroit-in-the-toilet cartoon also uses the yellow ochre, grungy theme that I’m fond of right now.

Sorry, with the move to Nashville I’ve fallen behind.  I’ll catch up soon.

Nashville is starting to grow on me.  I’ll get used to it soon – when it cools off and the humidity goes down. 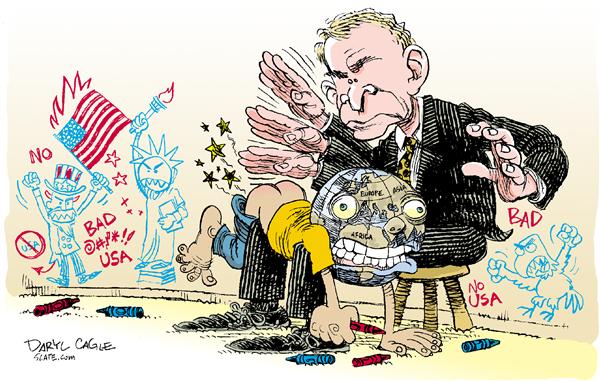