On Sunday, for Fathers Day and my birthday, my wife took me to the Creation Museum in Kentucky, outside of Cincinnati. I expected this to be a strange excursion into a foreign culture, and it was, but one I was prepared for after living in Tennessee for a couple of years. That’s me below with an exhibit.

This is a kids’ museum with lots of animated, life-size dinosaurs accompanied by exhibits explaining how the theory of evolution is wrong, the Bible is right, and dinosaurs are not so many years old after all. There are zip-line adventures through the lovely grounds, an ambitious petting zoo, and lots of shows. It is a place to bring the kids. I heard the same conversation everywhere in the museum as parents explained to their kids, “your teachers lie to you” and “don’t believe what they tell you in school.”

The photo below shows an exhibit where cave-kids are playing alongside the dinosaurs, much like in The Flintstones. It was explained that, in the beginning, animals were all vegetarians and everyone got along with the animals. It was only after Eve ate the forbidden fruit (depicted as berries) that the dinosaurs and other animals starting eating meat and getting surly.

Many of the exhibits are organized as rebuttals to science, contrasting man’s “theories” with God’s truth, and offering alternative explanations to rebut popular misconceptions – like the notion that Earth’s geology formed over millions of years, or that canyons are carved out by rivers. One recurring theme is the refutation of the scientific method, since the Bible gives us the truth as a starting point and the truth is not to be refuted. We learned that “natural selection” is OK, but “evolution” is wrong, a distinction that they seem to think is very important.

There is a lot of space devoted to the mechanics of Noah’s Ark, with descriptions of how the animals all fit into the ark and how they were probably cared for and fed while on the ark (for example, all the animals were likely young, so they would be small and easy to manage). There was a giant replica of a portion of the ark, and lots of talking, animatronic Bible characters. Methuselah was particularly chatty. There also was a lot of space devoted to how long these characters lived and how Adam and Eve’s kids had sex with each other, and why that was no problem. Different times. The museum also had a nice looking mural of the Skopes Monkey Trial from 1925 – the good old days when the government in Tennessee understood that evolution was a sham.

An interesting part of the museum was styled to look like an urban ghetto, with graffiti on brick walls; a heading on the entryway says “Scripture Abandoned in the Culture Leads to Relative Morality, Hopelessness and Meaninglessness.” Much like the attendees at the museum, the urban area featured no minorities. Peering through the broken windows on a blighted building there were videos of middle class white folks doing terrible things, like discussing how they were considering having an abortion. This was the chamber of horrors for the Creation Museum.

My math teacher wife tells me that her science teacher friends in Nashville get lots of blowback from students who call them liars. She said the museum made her sad. There is a big sign on the front door of the museum warning that anyone who acts disrespectfully, or who wears a t-shirt with a disrespectful message, will be kicked out. This is no place to argue. The docents seem hardened by many encounters with disrespectful visitors in the past; they have a stern attitude until they discern that the person they are talking to isn’t arguing, then they open up and are quite friendly. I didn’t test getting on their wrong side.

The museum has nice pizza, movies with impressive special effects, and a cool array of zip-line adventures. Also, as a father visiting on Father’s Day, my admission was free!

That’s me at the entrance with a nice looking dinosaur. Kids love dinosaurs. At the Creation Museum dinosaurs introduce kids to God and science – the museum hosts Summer science camps for kids, where “Science meets Truth,” encouraging kids to enter STEM careers. God help us. Here’s my latest local, altie-newspaper cartoon for the Nashville Scene. Nashville is called the “buckle of the Bible Belt” because the place is full of colossal, mega-churches and giant church corporate headquarters. The scale of these churches is stunning. I’m from California where people don’t talk to each other as often as chatty Tennesseans. Often, the first thing I hear in a conversation with a neighbor, or someone I don’t know, is “where do you go to church?” Happy Easter everyone! We have tons of terrific Easter cartoon collections for you to enjoy this fine Sunday morning: 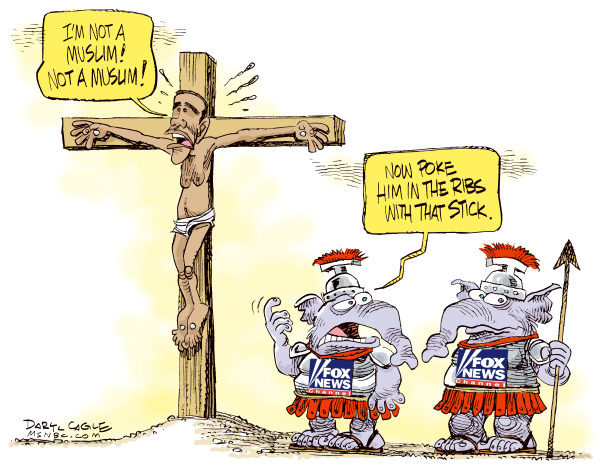 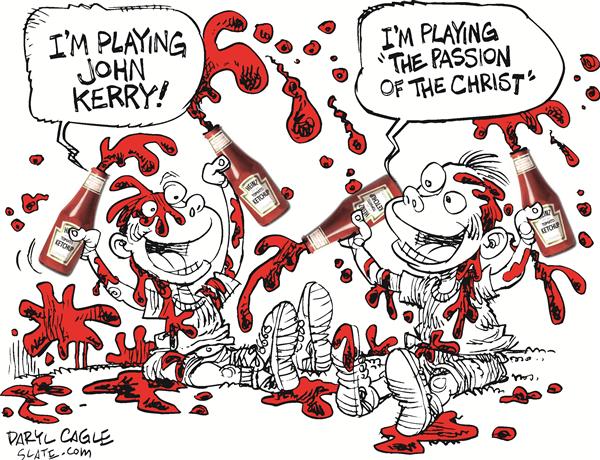