Another cartooning memory from my buddy, Randy Enos.

No, not Frank Sinatra, sorry. I mean the other ol’ blue eyes… Paul Newman. Newman and his wife Joanne moved to Westport shortly after I did and was a familiar figure around town until his death in 2008. My wife Leann’s parents were in the frame shop business and Paul and Joanne were two of their best customers. The Newmans liked to frame movie posters of their films from foreign countries. Paul was also an avid photographer so he brought a lot of photos in to frame. My mother-in-law, Tecla was immune to the celebrities she dealt with in Westport which were all the famous illustrators and cartoonists plus famous writers, musicians and the like. We also had Marilyn Monroe, Liz Taylor and Eva Gabor from time to time. They were all just regular customers to her.

One day when Newman came in to see if he had any outstanding bills to be paid, Tecla ruffled through her Rolodex and then gave up and said plaintively to him that she had forgotten his name. He roared with laughter. John Hersey, the famous author, was a favorite customer who often ducked into the frame shop just to sit for a while to get away from the bustle of Main St..

Tecla framed the illustrators work because in the old days, work by Harold von Schmidt, Steven Dohanos, Robert Fawcett and the others were delivered to the magazines in crates all framed up nicely. The clients kept the art for the most part, especially the work done for advertising.

Everybody in town would see Newman in the photo store, the pet store and the Ship’s Lantern having a beer. He tooled around Westport in a little blue Volkswagen bug. Nobody ever bothered him. For one thing, he was well known as one who did not give autographs so no one even asked… EXCEPT, a charming young girl of my acquaintance who, by some means or other, actually got an autograph from him… on her leather jacket where she had many famous autographs (she was very kind to ask me for one also). I think Paul was amused by the fact that this girl had this beat-up old jacket with all these famous autographs scribbled all over it.

The Newmans also had a house full of Randy Enos linocuts hanging on their walls because I had a friend who was a close friend of theirs that would buy prints from me every Christmas to give them. I found out they had them hanging all over the house because their daughter Nell said so when she was attending an experimental “free” school that had started up in Westport and was a classmate of my younger son. My wife was visiting there one day and was showing the kids how to make linocuts and she was using some of my cuts as an example. Nell said, “Oh we have some of those pictures on our walls.” Nell also had a horse which was housed in my illustrator friend Bill Sheilds’ barn.

Paul came into the frame shop one day and asked my father-in-law, Jim, if he knew anyone who could make some signs for him to tell guests to shut off the water in the sauna (or something). Jim said, “Well, my son-in-law is a cartoonist”. So, I did some caricatures of Paul telling people to shut the water off.

One time Leann and I were at the Free school and I had brought my pet snake to show the kids. Paul was there with his daughter. He came over to me and asked what kind of snake it was. When I told him it was a Gopher Snake, he said that he used to play with them a lot in California and he took it out of my hand and walked around with it for a while.

But, the funniest encounter I had with him was when he brought an x-ray of Joanne’s chest into the frame shop and asked Jim if I could paint a little cupid on it with a bow and an arrow shooting into her heart. He loved the fact that he could see the shadow of her heart in the x-ray. My father-in-law brought it to me and I studied it for a minute and said, “That’s not her heart. You’re holding it upside down, it’s the Iliac crest!”

I turned it right-side up and painted a nice little cupid and bow on it for him. Here’s my Trump Valentines Day Candy. I drew a tame version and asked my followers on Twitter (@dcagle) what they through – they wanted a less tame version. Somehow, I think newspapers will print the tame version. Knowing that newspapers have both versions to choose from, here’s an opportunity to see if your local editor is tame or spicy.

It is interesting to see the Democratic primary race heating up after Hillary Clinton has clinched the nomination. Hillary doesn’t seem to inspire passion among her supporters as both Bernie and Trump do.

This was a tricky one to draw, since I wanted Hillary’s and Bernie’s heads to be big enough to work in a simple layout. Bernie the heart threatens to be more of a digestive tract. Hillary should be right behind the donkey eyeballs … so … compromise – isn’t that what politics is all about? Watch me draw this one in real time in the video below. 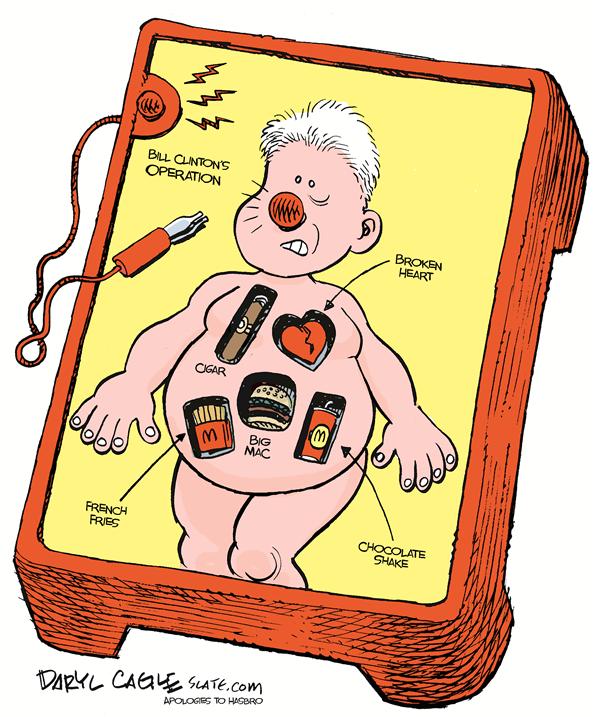