This is the Zika mosquito hitch-hiking from place to place. Here he is in black and white. I usually do a special version for grayscale, rather than just gray scaling the color art. In the video below you can see me draw this bad boy. I thought long and hard about whether to put a “Zika” label on the mosquito, and I made the manly decision to forego the label.

In the video below you can see me coloring the mosquito in Photoshop. It should open 14:40 into the video, that’s no mistake, it just takes out the time. I didn’t edit this one!

3/21/16 update: Here’s my mosquito as it appeared today in the Ouest France Newspaper, France’s highest circulation newspaper. Thanks to my buddy Kianoush Ramezani and his united sketches.org foundation that organizes this stuff. I’m impressed that they put my photo and bio alongside the cartoon. 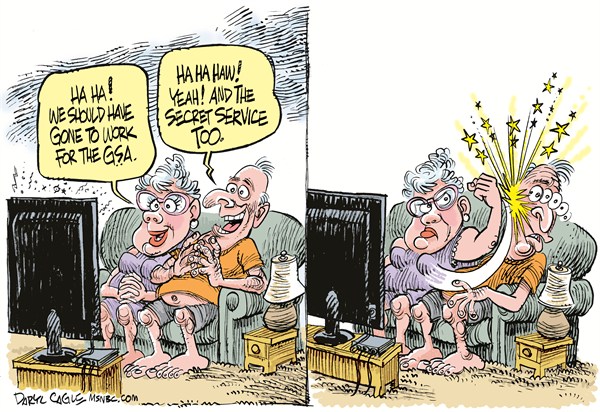 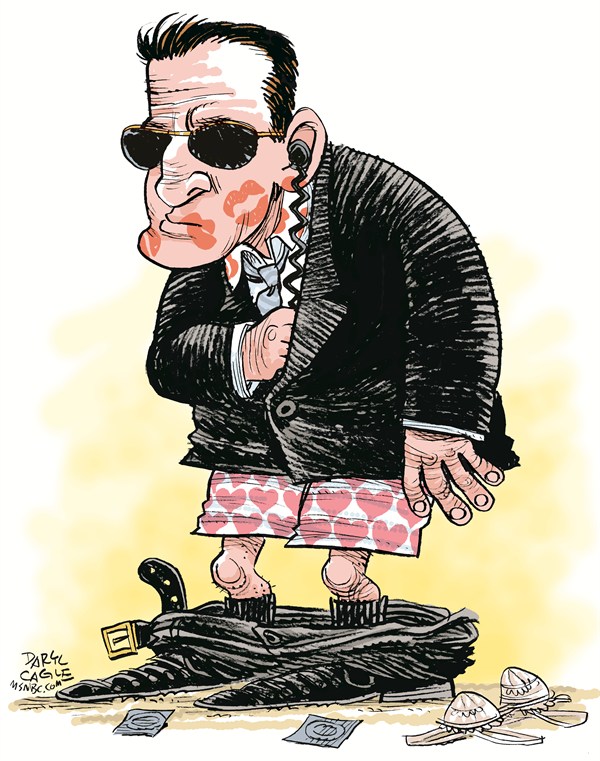 Editors: Due to new developments in Colombia we’re sending this updated version.

I just got back from a cool editorial cartoonists’ conference in Colombia last week. Bogota is a huge city of about 8.5 million people, full of universities and libraries and a thriving community of cartoonists. Colombian politics are crazy, bloody, complex and difficult for me to digest in just a week of cramming. Colombia is the second biggest country in South America and the third largest recipient in the world of U.S. foreign aid, because of all the drug issues there. The U.S. State Department brought me to Colombia on a speaking tour to attend the conference as the only American cartoonist.

The Colombian cartoonists are a spirited bunch, with odd one-word pen names such as Mico (monkey), Chócolo (corn-on-the-cob), Matador (killer) and Bacteria.

Mico is also a national TV star; he dresses up like a woman, holds an umbrella and talks about politics with his actor partner on a popular show that he writes each week called “Tola y Maruja.” Bacteria took his name to honor his mother who died from a bacterial infection soon after giving birth to him. Some of this Colombian stuff is pretty strange.

The Colombian political cartoonists have a macho attitude and take pride in speaking truth to power. Their cartoons are gory. Many recent Colombian cartoons are about the so-called “false positives” where the Colombian army was paid to kill paramilitary guerillas, and killed many innocent, civilian “false positives” along the way, identifying the innocents as militants in order to collect more government bounties.

The only two Colombians who came to mind when I first arrived were Juan Valdez and Pablo Escobar, the Medellín drug kingpin. Colombia had many years where drug gangs ran roughshod. Colombians order delivery of everything — even McDonald’s, harking back to the days when it was unsafe to walk the streets. The government didn’t do its job of protecting the people from lawlessness, so Colombians banded together, funding paramilitary groups for protection from the criminals. Of course, once they were formed and armed, those paramilitary groups became lawless themselves.

The FARC is a Marxist guerilla group that raises their funds through kidnappings, drug dealing and contributions from nutty euro-communists. In 2008, the Colombian security forces successfully rescued some hostages that the FARC had been holding for years, including former beauty queen, senator, presidential candidate and French dual citizen, Ingrid Betancourt. A high profile Colombian raid into Ecuador killed FARC leaders and led to a diplomatic wound with Ecuador, which seems to have recently been healed.

Now the streets are safe enough that pedestrians can worry about being mugged rather than riddled with bullets from narco-Marxist-terrorists, thanks to scandal-plagued Colombian President Alvaro Uribe, supported by the USA, who has done a messy but assertive job of crushing the paramilitaries. The Colombian cartoonists savage Uribe, who is term-limited out of office soon and just had his hopes for a third term quashed by the Colombian Supreme Court.

The Colombian cartoonists love to ridicule their neighbor and FARC supporter, President Hugo Chavez, who cut off economic ties between Venezuela and Colombia to protest Colombian military cooperation with the USA. Newspapers have stories every day about Chavez’s dysfunctional regime.

There were lots of questions at the conference about censorship and about where cartoonists should “draw the line” on topics they won’t touch. I encouraged everyone to think of editorial cartoons as a barometer of freedom. In many countries, cartoonists never draw their leaders; cartoonists in Venezuela aren’t allowed to draw Hugo Chavez; cartoonists in Cuba never draw Fidel Castro. In Colombia the cartoonists ridicule their president Uribe every day and their lack of respect for their president speaks well of healthy press freedoms in Colombia.

Cartoons are important in Colombia; it is great to see the respect that cartoons command and to see how they have an important spot in so many newspapers and magazines. Even so, Colombian cartoonists complain about many of the same business problems that plague American cartoonists. Business is bad for newspapers everywhere and cartoonists are poorly paid.

With all their complaints, the bloody, gory cartoons show that the Colombian cartooning profession is relatively healthy.