The Democratic National Convention seems to have all boiled down to one speaker, Khizr Khan, who’s son was killed in action in Iraq, and who’s speech wasn’t even scheduled in prime time. Trump wants to strike back at anyone who criticizes him, without regard to who is giving the criticism.  Tone-deaf Trump compares his own “sacrifice” as a businessman to the Kahn’s sacrifice.

And on the other side, it is interesting to see the GOP stalwarts stand up for a “gold star” family in this case, given how nasty they have been to Cindy Sheehan over the years. Watch me draw this one in real time in the video below.

Wasn’t that great? Now watch me color it in Photoshop!

I’m back from my brilliant cartoonist/journalist daughter, Susie’s wedding. I promise I’ll draw more cartoons. Really, I promise. I drew this one live on Twitch yesterday, about Melania Trump’s plagiarism of Michelle Obama’s speech at the Democratic Convention in 2008. I don’t care much about this non-issue, but it makes for a funny scene, which is the extent of my take on this. I know that the Donald is quite tall, but I feel compelled to draw him shorter, and I expect that the cartoons of Trump will grow shorter with time. Melania is a wonderful, goofy character to draw and I look forward to more of her! Readers might recognize my group of running media in this cartoon, which I re-use at every opportunity. I like the idea that the breathless media chasing down the next stupid thing is the same, over and over. In the video below see me drawing this one, and importing the media gaggle from a Cagle cartoon oldie.

In the next video below, watch me color this one in Photoshop while I chat with viewers on Twitch. 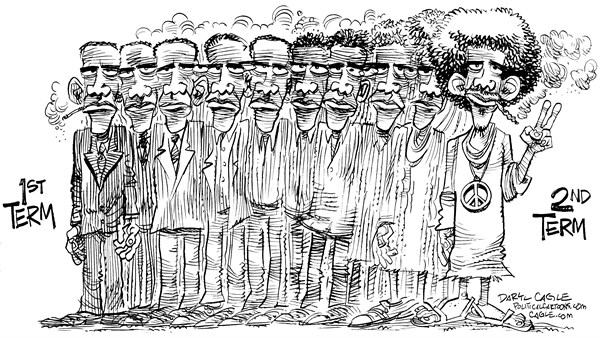 Cartoons as a Measure of Freedom

Mana Neyestani drew a child talking to a cockroach; in the cartoon, a boy says the word “cockroach” in different ways, and the cockroach replies, “What?” in the Azeri language of Northern Iran. Mana has a lot of Azeri friends and colleagues, a minority group that constitutes about 25 percent of Iran’s population and which is often the butt of local ethnic jokes.

It would seem that the Azeris have thin skins; when they saw Mana’s cartoon, they rioted. Thousands of Azeris filled the streets to protest the cartoon; they set fire to a newspaper office then pelted government buildings and police with stones, injuring several policemen. Dozens of rioters were arrested. Mana and his editor were abruptly fired from their jobs at “Iran Friday,” the weekend edition of one of Iran’s largest newspapers, which ran a front-page apology for three days following the riots.

Iranian officials blamed America and Israel for the riots fueled by the cartoon, but threw Mana and his editor into Tehran’s notorious Evin Prison where they face trial on charges of “insulting the Azeri minority.” Mana’s cockroach cartoon was published on May 12; the newspaper was closed down on May 23 and is awaiting a court decision on whether it may resume operations.

Tehran’s chief prosecutor, Saeed Mortazavi, is pressing the case against Mana and his editor. Mortazavi is best known for closing about 80 pro-reform newspapers in Iran and is rumored to be in line to become Iran’s next Justice Minister. He is also wanted in Canada in connection with the murder of a Canadian photo-journalist. Mortazavi ordered photographer Zahra Kazemi’s arrest and imprisonment on charges of “photographing a prison;” she died after being beaten and tortured. The Canadian Foreign Affairs Minister also accuses Mortazavi of falsifying documents to cover up his involvement in the case.

The Canadian Press quotes Prime Minister Steven Harper, “We’re appealing to the international community to use all manner of law available to detain this individual (Mortazavi), and have him face justice. I don’t know whether we’ll see a willingness or an ability to do that, but we want to make it absolutely clear that the government of Canada has not dropped this matter.” According the same Canadian Press report, Canada condemned Mortazavi’s appearance at a United Nations human rights conference this week and narrowly missed an opportunity to extradite him when he skipped a scheduled stop in Germany on his trip back to Iran.

My friend, Nik Kowsar, alerted me to Mana’s story. Nik used to be Iran’s top cartoonist; he escaped to Canada after receiving death threats. Back in Iran, Nik was recently tried and sentenced in absentia to four months in prison for insulting government officials and clerics. Nik tells me that Mana’s brother, Touka, who was another of Iran’s top cartoonists, has given up his profession out of fear.

I run a popular political cartoon web site on MSNBC.com (at www.cagle.com) where I feature Nik’s cartoons, and I used to run Touka’s work. The government of Iran recently blocked access to my site and I’ve been getting e-mails from Iranian readers, wondering where the site went and how to find it again.

Cartoons are more powerful than words. A cartoon on the editorial page screams louder than the words that surround it. The response to the Danish Muhammad cartoons shocked the West, but came as little surprise to Third World cartoonists who are used to seeing nutty reactions to their cartoons. Cartooning is a dangerous profession in much of the world where the accepted response to an insult is vengeance. The fact that a murderer is prosecuting a cartoonist should be seen as a measure of Iran’s dysfunctional society.

Most people in the West came away from the Danish Muhammad cartoon imbroglio with the idea that we need to be more tolerant of other religious views, and that drawings of Muhammad should be forbidden out of respect for the sensitivities of Muslims. Nothing could be more wrong as we see crowds riot in response to a drawing of a cockroach. The lesson to be learned from the Muhammad cartoons, from Mana, from Nik and from many other cartoonists who suffer from unreasonable Third World reactions to their cartoons, is that cartoonists are on the front lines in exposing the repression, intolerance and underlying chaos in totalitarian societies.

Daryl Cagle is a political cartoonist and blogger for MSNBC.com. He is a past president of the National Cartoonists Society and his cartoons are syndicated to more than 800 newspapers, including the paper you are reading. His books “The BIG Book of Bush Cartoons” and “The Best Political Cartoons of the Year, 2006 Edition,” are available in bookstores now. There are riots around the Muslim world, with embassies burning; and 12 poor Danish cartoonists who now fear for their lives have gone into hiding, under 24-hour police protection, as millions of angry Muslims call for their execution. Anyone who hasn’t seen the cartoons of the Prophet Muhammad must think they are jarringly offensive –and since very few newspapers in America have chosen to print the cartoons, what else is there to think?

To Muslims, depictions of people – and especially depictions of Muhammad – are forbidden, so it doesn’t matter if the cartoons make a statement or not; the very idea that cartoons of Muhammad exist is offensive. To a Western eye, there is little that is offensive in the cartoons. News reports refer to the “Danish cartoons including one showing a bomb in Muhammad’s turban,” and even that is an exaggeration, describing the 12 cartoons by mentioning only the one that Westerners could imagine causing some offense. Truly offensive cartoons, which never appeared in the Danish newspaper, have been circulated to Muslim crowds to whip up their angry religious fervor.

The overblown reaction in Muslim countries to the blasphemy of the cartoons is what the story has become, as streets filled with violent protestors demand that the infidels in other countries respect a Muslim taboo. Clearly there are many in the Muslim world that are eager to stoke the fires of a clash of civilizations; they think they have found their popular issue with the cartoons.

Politically correct commentators in the West devote equal time to condemning Denmark’s Jylland-Posten newspaper as they do for the crowds that are burning embassies and inciting even more violence. Almost every newspaper in America has refused to reprint the cartoons, leaving readers to believe that if they saw the cartoons, they would be offended too. In fact, if American readers saw the cartoons we would say, “This? This is what makes them so angry? That’s crazy!”

New and truly offensive Muhammad images are popping up all over the Web. The images show a Muhammad toy on a Lego box, having sex with an underage Lego Aysha girl, Muhammad on products such as urinals and toilet paper, and lots of usage of the original Danish cartoons, revamped to make them more offensive with references to sex, pork, drugs and Danish products that are boycotted in Arab countries.

Not to be outdone, a Belgian-Dutch Islamic political organization, the Arab European League (AEL) has started posting cartoons that they think will be as offensive as possible to the Danish. They describe their effort this way:

“After the lectures that Arabs and Muslims received from Europeans on Freedom of Speech and on Tolerance. And after … many European newspapers republished the Danish cartoons on the Prophet Mohammed. AEL decided to enter the cartoon business and to use our right to artistic expression. Just like the newspapers in Europe claim that they only want to defend the freedom of speech and do not desire to stigmatize Muslims, we also do stress that our cartoons are not meant as an offence to anybody and ought not to be taken as a statement against any group, community or historical fact. If it is the time to break Taboos and cross all the red lines, we certainly do not want to stay behind.”

One cartoon on the AEL site has gotten the most attention; it features Holocaust victim Anne Frank in bed with Adolf Hitler, apparently after having sex, Hitler smokes a cigarette and says, “Write this one in your diary, Anne.” Aside from that cartoon, it appears that the cartoons that the AEL thinks will be most offensive to Danes are anti-Semitic and Holocaust denial cartoons that are not different from what passes as everyday fare in Arab newspapers. Of course, for the AEL to make their point effectively, we’ll need to see the Danes respond by marching in the streets, burning embassies, and calling for the executions of AEL cartoonists.

The proper response to an insult in the press is to respond with more speech, rather than violence in the streets, and the escalating war of offensive cartoons is simply speech. But as the reactions become uglier, readers may believe that the truly offensive images they see on the Web are the kind of cartoons that set off this clash of civilizations, rather than the dull, banal Danish cartoons that they haven’t seen. It is important that readers understand what a small spark set off this religious bomb. American editors should rethink their decision not to reprint the original Danish cartoons.

Daryl Cagle is the political cartoonist for MSNBC.com. He is a past president of the National Cartoonists Society and his cartoons are syndicated to over eight hundred newspapers, including the paper you are reading. His book, “The Best Political Cartoons of the Year, 2006 Edition” and “The Big Book of Bush Cartoons” is available in bookstores and Amazon.com now. 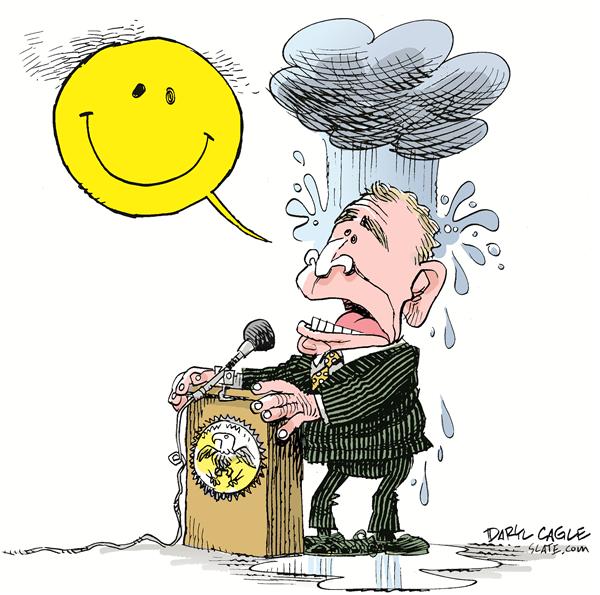